‘Most highways are lacking in safety for road users’ 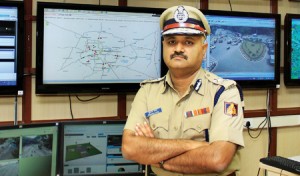 Praveen Sood, ADGP (CCTNS) and Commissioner for Traffic and Road Safety, Karnataka feels that the first seminar to be held at TrafficInfraTech Expo, 2012 is important as traffic management on highways does not receive the attention it should. “There is an over emphasis on cities in our country,” he says.

India had 1,33,000 deaths in road accidents in 2011. Roughly 20% of these fatalities occurred in Metropolitan Cities and remaining 80% on either highways or tier 2 and tier 3 cities. The irony is that 80% of our enforcement effort in terms of manpower or resources is deployed in Metropolitan cities and only 20% on the highways and other towns which contribute 80% of the fatalities. This demonstrates the contradictions in our enforcement strategy. The objective of the strict enforcement should be to save lives and make the roads safer. Somehow enforcement has degenerated into revenue collection — legal or illegal. In Karnataka itself, out of 8000 fatal accidents last year, 7200 occurred on the highways and towns other than Bangalore. Road safety on highways should be our priority, especially during the construction stage” said Praveen Sood, Additional Director General of Police – Police Computer Wing and Commissioner for Traffic & Road Safety, Bangalore.

“A study jointly conducted by Bangalore City Traffic Police and National Institute of Mental Health and Neuro Sciences (NIMHANS) revealed that 50% of the fatal accidents in Bangalore City took place around 13 pockets and all of these were on the national highways entering the city; the stretch between Bangalore International Airport to Hebbal being the worst among them,” said Sood while speaking with TrafficInfraTech. “Good quality roads don’t necessarily mean safer roads. This is because most of the highways lack totally in terms of safety for the road users including pedestrians trying to cross the road. Also, our road user behaviour does not improve in sync with the improvements in the roads. Highways cut through villages ruthlessly; sometimes cutting the village into two parts in such a way that villagers’ huts are on one side and fields on other side. How does a farmer go across the road if there is no underpass for his bullock cart to cross the road? How does a farmer’s child go to the school across the highway if no skywalk is provided for him to cross? Not surprisingly, bullock carts move in the wrong direction on highways. It is not surprising that villagers, with the instinct to live safely, create mountain-like structures called speed breakers themselves. Strictly and scientifically speaking, speed breakers are a big no on the highways. These self-made road humps without any standardisation or painting or indication actually kill more people than save. A study conducted on Bangalore – Mysore highway has showed that there was a 300% increase in accidents after a good quality highway came up in place of the old road,” Sood added.

As Commissioner for Traffic & Road Safety, Sood is focusing on replicating in tier-2 and tier-3 cities in Karnataka what he has achieved in Bangalore in terms of technology driven traffic management. Traffic surveillance cameras are already running in Mangalore, Shimoga and Hubli-Dharwad. This year, three more cities, i.e., Bellary, Belgaum & Gulbarga will come under surveillance through cameras. In addition, paperless traffic enforcement through BlackBerry, which is a grand success in Bangalore City, is being extended to the rest of the state in the current year. “These cities are untouched by development in traffic technology and it is exciting to see signboards and cat’s eyes on the road.”
Karnataka Police, which embarked on a computerisation drive along with WIPRO in 2006, will be moving into a paperless crime record regime by the end of 2012. It would ensure that as soon as an FIR is filed, the authorised police officer is able to view it instantaneously anywhere in real-time. 50% of the police force will be trained in this application along with basic computer awareness. Already 1400 locations including 906 police stations and remaining higher officers in the state are connected to the State Data Centre and crime records are accessible online. 100% of the FIRs are lodged using computers.

“CCTNS Project aims at creation of nationwide networked infrastructure for evolution of IT enabled crime & criminal tracking network system and ‘investigation of crime and detection of criminals’ in real-time. Our existing ERP solution called Police IT has been enhanced to meet the requirements of CCTNS and together, they form one entity in Karnataka.”

Karnataka has achieved a high degree of computerisation and is ahead of other states but Tamil Nadu and Andhra Pradesh are fast catching up.

(Praveen Sood is a panelist for the Seminar – ‘Traffic Management & Safety during Highway Construction’ – to be held on the first day of TrafficInfraTech Expo, 2012)