This was a similarity that India and Brazil could have done without. Known worldwide for their high road fatalities and accidents, the two nations have been chosen for a pilot project, SaferBraIn, under a European Union programme to carry out research on the safety of vulnerable road users. The recommendations of the study will then be implemented in these Emerging Economies, and later, transferred to other countries as well. In India, a Road Safety Audit has been carried out in Pimpri-Chinchwad under the programme.

The Pimpri-Chinchwad Municipal Corporation (PCMC) has formally accepted to incorporate the Road Safety suggestions given in the new executive design for the junction.

SaferBraIn, a European Commission funded project that was started in 2009, focuses on safety of the vulnerable road users, i.e., cyclists and pedestrians. Aimed at providing innovative guidelines and tools for Vulnerable Road Users’ Safety in India and Brazil, it will end in 2012.

Informs Luca Persia of University of La Sapienza and Chief of SaferBraIn Project, “Given the high number of pedestrian and cyclist fatalities in India and Brazil as against Europe, it was felt that Europe could offer immense help in improving the Vulnerable Road Users’ safety by ‘transferring and adapting to the local contact the results of the European research and experiences’. The main aim of the project is to increase the level of safety and security of the whole road transport system and its components, focusing the attention on vulnerable road users, thus contributing to the overall scope of reducing the number of fatalities and the severity of injuries caused by road accidents.”

Antonio Tripodi, Technical Manager of the project says about the Pune initiative, “The RSA activities in Pune were part of some pilot tests, aimed at improving the safety conditions of infrastructure by applying some of the concepts analysed during the project. The project has a heterogeneous consortium of 11 partners two of which are Indian.” Rome’s University of La Sapienza is one of the partners too and it was the University that was in touch with PCMC as Bhakti-Shakti Junction, located under the jurisdiction of Pimpri-Chinchwad Municipal Corporation, was chosen for the audit.

While La Sapienza University and other partners handled various aspects of the project in India and Brazil including visiting them and coordinating with their respective administration bodies, the university commissioned the analysis of the audit to TMS Consultancy of Italy in 2011.

junction at Pune in order to identify the critical aspects of road safety and provide fixes to improve road safety of the intersection,” says Raimondo Polidoro, Director, TMS Consultancy. “It was a desk-job for us as we provided our experience and knowledge by analysing the construction audit, the work zone audit, the final safety inspection, etc. We will not be involved in the deploying of any technology after the audit.”

Bhakti-Shakti Junction – Venue of the RSA

Pune’s Bhakti-Shakti junction, popularly known as the BS junction, is the grade intersection between National Highway 4 (Mumbai-Pune Highway), Talawade Road (also called Borhade Road) and Umesh Shetty Road. Located in Pimpri-Chinchwad municipal area in the north of Pune Metropolitan Area, the junction has big dimensions since the National Highway and its service roads have a width of about 60 metres, and Umesh Shetty Road and Talawade Road together have a total width of about 70 metres. 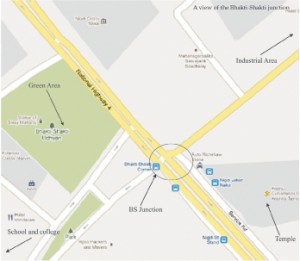 The junction witnesses huge vehicular and pedestrian traffic. A temple at a corner, a green area – the Bhakti-Shakti Park along Talawade Road, some industries, and schools and colleges towards the Umesh Shetty Road are the immediate activities located near the junction. Given the heavy traffic of commercial cargo vehicles, there is an octroi post near the junction and bus stops and Tuc Tuc stations (three-wheelers) are also located at the corners.

After a research was carried out on five probable sites, the BS junction was chosen on the basis of four factors: time (where PCMC has already put in place some emergency interventions to improve safety), space (geographical location is urban), focus (improvement of VRU facilities) and data (given by PCMC which had put a design in place by March 2011 and provided Geometric Road Design, Horizontal Road Design, Vertical Road Design and Traffic lights plan along with report and photograph).