Whatever the ongoing controversies surrounding auto rickshaw drivers in Mumbai, the fact is: They cater to the travelling needs of a major chunk of Mumbai’s population. So, when the issue of auto rickshaw drivers refusing to ply on short distances began leading to people’s protests and politicians’ shrewd machinations, three young professionals decided to make a difference. They launched RickshawaleTM, a call-to-book rickshaw service that can be availed at `20 more than the normal fare by dialing numbers 022 25747474 or 9664010101 or by booking online on www.rickshawale.com. The company is called Eureka Trans Solutions Services Pvt Ltd.

The service, available in greater Mumbai at present, will gradually be extended to the rest of Mumbai and then, throughout India. Hemant Jain, the brain behind the project and Director with the company, has strong experience in vehicle tracking. Says he, “After I left the Reliance Group where I was the head of their Logistics Division, I thought of coming out with a socio-economic project for the lower strata of society. Since I am confident of my knowledge on the technology coming in the country in the transport sector and was aware of the tracking devices, I decided to start an auto service on the lines of the Meru Cab Service. My main concern was to bring down the cost as much as possible.”

The main challenge he faced was of connectivity between his office and the auto rickshaw drivers. “It was impossible to expect the auto rickshaw drivers to afford the GPS device like in Meru cabs as it costs about `75000. An auto rickshaw itself costs `1,30,000.” After a grueling exercise of finding an economic solution, by the mid of this year Jain was able to conceptualise a tracking device that would work on GPRS. He then engaged Loop Mobile as its tracking partner.

The device, called the bidding device or the rickshaw transport organiser, is a matchbox like instrument which the driver hangs from his neck. It has three buttons – one for being allowed to be tracked by the call centre of Rickshawale, the second for bidding for a passenger and the third for giving the message to the company that he is engaged and will no longer be available for bidding.

“When he wears the device and presses the first button, it appears on our computer screens. When a passenger calls our call centre employee sitting in our office for an auto rickshaw, or makes a booking online, our employees track the auto drivers in or around the said area on the computer and send a request on their devices for bidding.” If the driver is interested in bidding, he will press the centre button of the device. The computer tracks the first bidder on the “fastest bidder first” principle. An application specially created in the system, (of which Rickshawale has the patent and the copyright), immediately sends the customer’s details to the rickshaw driver on his mobile and the rickshaw driver’s coordinates on the customer’s mobile. “All this happens automatically in seconds,” avers Jain.

For the call centre employee to know that the passenger has been picked up and the rickshaw driver is not available for bidding any more, the driver presses the last button (the confirm button) on the device. That very moment, he disappears from the company’s screen. This way, the company staffer knows that the passenger has been picked up. Till the driver doesn’t press the first button again, the call centre employee would not be able to track him. Once the customer alights from his rickshaw and the driver wants to be available again for picking up another passenger, he releases the button again and appears on the screen. The entire write up, process and application written by Jain were coded by JVM Networks of Coimbatore which also manufactures them.

Director Gautam Kohli, a MICA Ahmedabad post graduate who runs a software company, heads the digital division. He informs, “The device has a mobile battery that can last for 24 hours. That is helpful even if the driver chooses to work two consecutive shifts. The device updates us on its location, and therefore, the driver’s, after every one minute.” 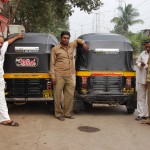 The rickshaw drivers are required to pay `151 as their lifetime membership fee. Apart from this, they pay `999 at the end of every month for the services given to them, `1500 as deposit money (payable in three installments) for keeping the device and `40 per day for getting business from the company on a daily basis. The passenger is required to pay the drivers `20 as convenience fee over and above the actual fare for customised service and also because the driver travels from a distance to reach the passenger’s specified area to pick him up. “We promise them around five fares a day. Our hypothesis is that people willing to pay `20 as convenience charge are the people who are likely to travel for a distance that will cost them at least `60 or `70. Nobody will pay `20 to travel a distance of `15 or `20. So the driver anyway gets the dual advantage of the convenience fees which is an absolute charge over and above the actual fare and the fare for a long distance – the profitability of running a rickshaw starts only after the first four to five kilometres,” says Kohli. The website gives a trip fare calculator to enable you to calculate the fare.

The amount of `999 coming in from each member will be the revenue for the company, says Jain. “The company is giving the members an insurance policy of `two lakhs in case of accidents, a medi-claim facility and two free PUC checks a year. Spare parts for autos will be given at a discounted price – the company is busy working out a model in this regard,” he claims. Advertisements on rickshaws are not permitted by law at present but talks are on in that regard with the Chief Minister by a few representatives of auto rickshaw drivers. “Should that get cleared, we would look at advertisements too as a source of income. Our revenue stream will open once we have a membership of 2000 drivers,” he adds.

The membership has been closed at 300 on the 15th of August, 2011. “We want to first check how the technology and the system work before going ahead with more members,” says Jain. “It wasn’t easy getting the members initially, he says. “I personally used to go to every rickshaw stand and speak with the drivers but they said they owned their world and did not want to come under anybody.” Things began moving after sustained efforts for 15 days. The service was started after a pilot run within Mumbai in October 2011. After some time, Jain intends to add more members from the “over 700 applications” he has from drivers who hail from Maharashtra, North India, South India and many other states.

Sandeep Agarwal, the third Director who heads the logistics division, has grown up in a family of transporters and owns his own company: “We plan to go pan India after some time,” he says. “We are already in conversation with people in Pune. They are very interested in our model. So, hopefully it will pick up in the other important cities too where rickshaw is a major part of commuting, transport.”

After the membership number crosses 1000, Jain plans to begin a taxi service too. “The technology is the same for all. The options are open.”

Previous: Germany’s Smart mobile manoeuvers
Next: Mobiles As The On Vehicle Monitoring Stations