Over the last decade, India has established itself as one of the fastest growing economies in the world. With a GDP growth rate of 7.1% per annum, the country is adding over 12 million people to the workforce every year. Coupled with this growth and development, the country’s mobility needs have also grown tremendously.

Bus-based public transport in India is operated by 62 government-owned State Transport Undertakings (STUs). While the system caters to the needs of over 70 million people for their daily commute, cities around the country are burdened with extreme traffic woes. If you are one among the 70 million, chances are that you don’t think very highly of our bus systems.

Only 18% of all work trips made in the country are on public transport. Since 2001, the country has seen a seven-fold increase in the number of registered vehicles, owned by a mere 11% of all Indian households, majority of which are concentrated in cities. The proliferation of private vehicle ownership and usage has, in turn, subject public buses to congestion and delays, affecting their reliability and attractiveness.

Owing to multiple financial and technical challenges faced by Indian transit agencies, urban bus capacity and service upgrades have been limited. The private mobility sector, on the other hand, has seen a huge boom over the last few years, with no less than 250 new mobility start-ups being registered every year since 2015. According to a report published by Tracxn, USD 3.6 Billion has been invested in mobility start-ups in 2017 alone. Additionally, 15 out of 62 transit agencies across the country have invested millions of dollars into setting up Intelligent Transport Systems (ITS) as a first step to improve efficiency and operations of their systems. This presents a great opportunity for Indian mobility ecosystem to leverage the innovative capacity of the private sector to improve our public bus operations, commuter experience and establish more efficient service models.

Globally, city bus systems are operated and maintained using a digital data backbone, to make systems more efficient, reliable and cost effective. While digitization of the public bus system in India has been slow, certain cities with established ITS systems have already started to see improvements. Management Information Systems (MIS) used by Karnataka State Road Transport Corporation (KSRTC), in Mysore city has improved the reliability of their services with 90% of all departures happening within five minutes of the scheduled compared to 27% in 2012. This has led to reduced wait times for commuters and improved their perception of the bus system.

Congestion is costing over USD 22 billion annually in Bangalore, Mumbai, Delhi and Kolkata alone. There is a dire need for transit agencies to take the lead to make public transit more attractive and catalyse a shift from private modes. Leveraging the value of the data they collect, cities around the world have improved ridership and enabled greater integration between modes. Exemplifying this, Transport for London (TfL) estimates that the city’s transit planning apps such as CityMapper have resulted in an annual value of time saving for commuters amounting to £116 million. 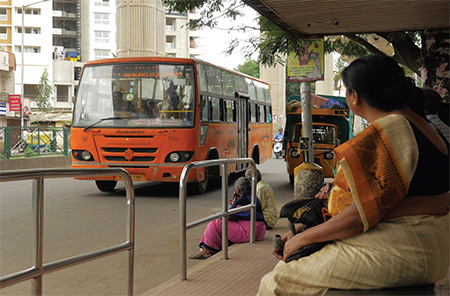 Currently in India, 140,000 state owned buses cater to the needs of 70 million passengers every day. With the growing mobility demand, the country will require an additional 460,000 buses at the existing ridership by 2031. While the government is doing a lot to invest in and increase capacity of public transit (metro and bus systems) across the country, significant physical infrastructure is required to meet the growing demand and achieve global standards of commute.

Based on WRI India’s research, transit agencies have the potential to improve their efficiency by embracing new business models provided by private on-demand players in the city. The different models of engagement allow transit agencies to go asset-light by adopting licencing and leasing models of vehicles and software, thereby eliminating the cost of ownership, operation and maintenance of the system. Such engagements would not only help agencies cater to various strata of the population but also would promote data driven-decision making within the transit agency itself. This will in turn lead to optimized routes, improved scheduling and fleet and crew management.

With the world investing in our mobility ecosystem, it is in the best interest of our bus agencies to keep an eye on the innovations that emerge and imbibe these as a step towards transforming our public bus systems.

It is in this context that WRI India, supported by FedEx, launched the Better Bus Challenge in April 2018. Using the Challenge as a platform, the Better Bus Initiative attracted over 75 solutions from across the globe that focussed on improving the efficiency and quality of public bus services. Twelve of these were selected to be a part of the Better Bus Cohort, including data analytics and optimization tools, smart information and ticketing systems and shared and electric mobility service models.

There is a need for our public transit system to look beyond traditional models of public private engagement and build systems wherein innovative technology can be tested and proof of concepts established, in order to assess their true potential with regard to improving efficiency and quality of commute and extend services to those unable to access the system.