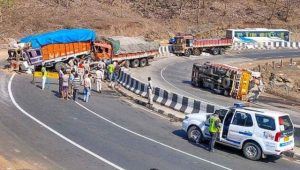 Ministry has identified 5803 black spots on National Highways based on accident and fatality data of year 2015-2018 in 30 states/UTs. Out of 5803 Black spots, temporary measures have been taken on 5167 black spots and 2923 Black spots have been permanently rectified.

Steps being taken by the Ministry

The emergency / medical facilities for the road   accident victims are provided as per the respective contract / concession   agreements signed between NHAI and the contractor / concessionaire. NHAI has also signed contract agreements   for supply, operation and maintenance of 126 AIS-125 compliant Basic Life Support ambulances across NHs in the country.

As per the information available with TRW, total number (provisional) of road accidents on National Highways in 2020 is 116496.