Authorities in India have long been exploring solutions that adapt to changing traffic conditions in cities by the hour and the day. Adaptive Traffic Control System (ATCS) is not entirely new to India, however, the National Smart Cities Mission has helped in bringing in a broader level of understanding and implementation experience. 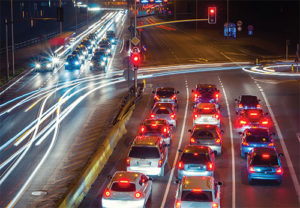 The graph chart below is a plot of the traffic junction cycle time (total time of all sequences in a cycle) through-out the duration of a typical day. The spikes and dips are signal times adjusting to the flow of traffic where as the one which is relatively flat belongs to fixed time systems that are prevalent in our cities today. The area between the plots is the time saved for commuters, this timesaving when extrapolated for a year for a busy city, will be significant – certainly improving travel time – a key factor for city’s Citizen Happiness Index.

Fixed time systems do not adjust to varying traffic conditions. To have a junction responding to varying traffic demand, vehicle actuated systems could be used, but in India these are limited to a particular junction, in other words an isolated system. A growing Indian city requires traffic managed at an area level where in one signal works in tandem with others – a coordinated signal system.

There are different types of ATCS technologies across the globe – new and old, mathematical and algorithmic, upstream detection and stop-line detection.

Sydney Coordinated Adaptive Traffic Systems or commonly known as SCATS was developed in 1970’s by a government entity in Australia known as Roads and Maritime Services (RMS). Since then SCATS has been deployed in more than 29 countries, 270+ cities and across 40000+ junctions.

SCATS is an area traffic management system consisting of hardware, software and a unique traffic control that operates in real-time, adjusting signal timings in response to variations in traffic demand and system capacity as they occur. The hardware consists of a controller and a detection system installed at each junction.

Detection of real-time traffic conditions is a critical input for efficient operations. Over a period of time, several detection methods such as inductor loops, infrared and video have been used. Video detection is most suitable for Indian conditions, primarily because it is non-intrusive and captures images for verification.

SCATS, through the controllers and software, manages three main parameters to achieve efficient traffic flow and signal coordination.
• Cycle Time: The total time of all phases running in sequences in a cycle.
• Phase Split: The proportion of cycle time allocated to each phase in a junction.
• Offset: The time relationship between two green phases of successive set of signals in a coordinated system. 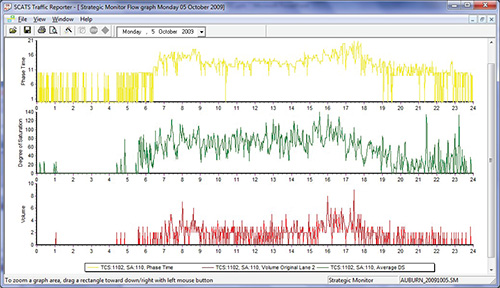 Degree of Saturation (DS) is a traffic demand measurement parameter used by SCATS. DS represents how effectively the road is being used. DS greater than unity (insufficient green time to satisfy demand) will occur in congested conditions, and SCATS is known to quickly respond to such an over saturated condition.

When congestion occurs, the system estimates the full extent of unmet demand using a parameter known as reconstituted volume. Reconstituted volume is estimated using the calibrated and measured conditions at each detector. It records the duration of congestion for traffic performance purposes and can be configured to respond adaptively to a measured congested state.