AID-TMS focuses on optimizing traffic flow by managing the traffic lights based on the density of the traffic at a particular junction. The system uses live images from the CCTV cameras at traffic junctions for real-time traffic density calculation by detecting the number of vehicles at the signal. It automatically detects vehicles, their type, driving pattern, etc. and through this information gathered sets the signal time accordingly. This helps to optimize the signal times and the traffic is cleared at a much faster rate than a static system.

Another feature of the system is that the traffic lights throughout the city communicate with each other. Apart from this, AI is always learning and improving. So, over time it can reduce delays, congestion, and waiting time without manual intervention. Therefore, in the long run, it can also reduce fuel consumption and pollution, and alleviate unwanted stress.

AID-TMS has been implemented in the cities of Hubballi and Bengaluru in Karnataka. The data so far shows a reduction, around 52% in Hubballi and 38% in Bengaluru, in the vehicle congestion at the roads and junctions that have the AID-TMS when compared to the junctions that don’t. 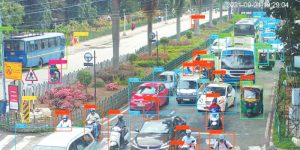 The other haunting issue with the growing traffic on the Indian roads is troubling accidents and unsettling collisions. Road accidents are the most unwanted thing to happen to a road user. Some of the common behaviors that result in road accidents are, avoiding safety gear like seat belts and helmets, jumping the red light, non-adherence to lane driving and overtaking in a wrong manner, and triple riding.

The current systems in place for monitoring traffic violations are inspection drives and speeding cameras. Usually, inspection drives are carried out at busy intersections where Policemen lay in wait to catch offenders. The prime drawback of this method is the poor strength of traffic police. The other concern with this is the issuing of manual challans which is difficult for maintaining records. Thus, Manual checking of vehicles is troublesome, and mistake-inclined due to feeble and problematic human memory.

Furthermore, data from the past also show that policemen were involved in fatal accidents while trying to catch a speeding car. As a result, speeding cameras were introduced but they also possess some drawbacks. The prime one being that it only monitors for one type of violation – speeding. Consequently, a need arises for a traffic violation detection system to deal with this errand, which can identify criminal traffic offenses.

The AI Driven Traffic Violation Detection System is designed to detect multiple traffic violations at the same time. The system detects the violations that are the main point of focus in Indian traffic like not wearing a seatbelt while driving a four-wheeler, not wearing a helmet while driving a two-wheeler, jumping the red light, going in the wrong/opposite direction of the road, triple riding on a two-wheeler, parking in a no-parking zone. It is also capable of incorporating detection of other types of violations as decided by the law and visible in cameras. It performs all these functions using a CCTV camera installed at the junction.

All the data gathered from the Traffic Management System and Traffic Violation Detection System is made available to the authorities in the form of online analytics on a dashboard called “AI-ways”. Some of the features of the Dashboard include displaying traffic status in real-time, data analytics about the average wait time, the number of violations that occurred per junction, type of violation, and the challans generated from these violations. It relays this information to not only the traffic police but also to the commuters.

The system helps keep the density of traffic at a minimum, reduces wait-time of vehicles, and keeps the violations in check which is a huge challenge for Indian cities. The system is built for India by its people taking into consideration the distinct Indian traffic and non-standardized number plates. Beltech AI understands that the needs of Indian roads are unlike any other country. Thus, Beltech AI has come up with a unique solution bearing these challenges in mind. Beltech AI does not use any pre-built technology from other countries, it has built everything in-house and bears 100% rights to its intellectual property.

The incident that acted as a catalyst for this initiative was the death of Megha, the childhood friend of Beltech AI’s CEO, Agastya Bellad. She lost her life on the way to the hospital as the ambulance could not reach on time .