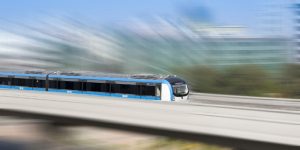 Expanding the Metro System in a Densely Populated Area

The Delhi Metro Rail Corporation is working on its Phase IV expansion to improve rail connectivity between India’s capital and the further regions of the National Capital Region. The project includes constructing a new 104-kilometer metro railway line that connects the Majlis Park metro station to the current RK Ashram Marg metro station. Currently in the design stage, the project team expects to complete the Phase IV expansion project by the end of 2022.

DMRCL was responsible for reviewing the detailed project report and proposing changes in the alignment design for the railway track section between RK Ashram and Majlis Park metro stations based on current requirements. The new rail corridor includes nine interchange stations, six of which are underground while the other three are elevated.

This project faced many design challenges, as the city of Delhi is a densely populated area, and the railway line passes through areas of mixed traffic. The region’s heavy congestion results in minimal land availability and Delhi Metro Rail Corporation needed to propose alternative design options in the construction of the railway to circumvent congested areas. Additionally, the team needed to maintain safe offset distances from historical monuments in an effort to prevent their deterioration. 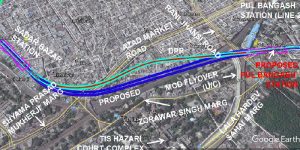 Designing the alignment at stations also posed challenges, especially with regards to maintaining the proper horizontal and vertical distances. The team could modify the alignment easily with OpenRail Designer. Revisions made to the proposed alignment design included shifting and lengthening stations and tunnels, changing track alignment, deepening stations to fit clearance levels, and rotating tracks to avoid densely populated residential areas, station boxes, and multi-story buildings. The team also identified numerous changes to the initial track alignment and optimized the design to minimize property acquisition. Additionally, the proposed design maintained safe offset distances from protected monuments while minimizing property acquisition at the station location. As a result, the railway will integrate into densely populated areas while preserving the city’s cultural heritage. Using the geographic capabilities in OpenRail Designer reduced the cost of the project and the resource hours, allowing the project to be delivered on time.

The project team used OpenRail Designer to complete the 3D alignment design in less than three months. The application’s capabilities made it easier to quickly make necessary changes. Visualizing the final product and sharing the design with all participants was simple when utilizing Bentley’s 3D capabilities. With this quick turnaround, the team reduced resource hours and project costs.

The system is the first railway project in the world to claim carbon credits for regenerative braking. It has also been certified by the United Nations as the first metro rail and rail-based system in the world to get carbon credits for reducing greenhouse gas emissions. The Delhi Metro rail system has helped reduce pollution levels in New Delhi by 630,000 metric tons every year, thus diminishing global climate change. Many stations have roof-top solar power plants and the metro system has helped remove about 700,000 vehicles off the streets. The Phase IV expansion will make it possible for the organization to continue improving or sustaining a good quality of life for the populations relying on this piece of infrastructure.

Create a design that considers the dense population of the region, addressing their transportation needs and determining alternative solutions to deal with land scarcity.

The project team completed the alignment design of the railway line in under three months.

The 3D capabilities of OpenRail Designer allowed the team to easily visualize the final proposal and share it with all participants.