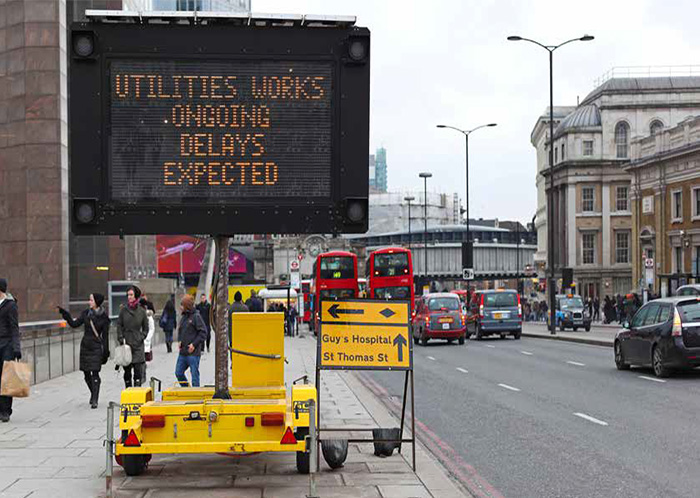 Variable Message Signs (VMSs), are one of the important ITS devices, which provide real-time traffic information of road network to drivers to optimize traffic safety and efficiency in urban road networks. However, its potential is not fully understood in India. TrafficInfraTech finds out what are its major challenges…

A Variable Message Sign, often abbreviated as VMS is an electronic traffic sign used on roadways to provide motorists with important information about traffic congestion, incidents, roadwork, travel time, special events or speed limits on a specific highway segment. In some places, VMSs are set up with permanent, semi-static displays indicating predicted travel time to important traffic destinations such as major cities or interchanges along the route of a highway.

Today, VMS essentially has better potential to give the road-users immediate updated messages and about incidents on the road and other relevant traffic conditions that change over time. But the VMS technique has to earn credibility of its messages. It is very counterproductive each time there is a message that warns for something that does not exist at a relevant distance (false alarm) or when there is no message of a real danger.

The road-user should perceive VMS messages to be firmly based on true traffic conditions. The messages should be short and informative. They should be directly relevant for safe driving and/or for adaptation to the flow of traffic and immediately call for a change of behaviour or a decision about choice of an alternative route. In short, a high level of credibility of VMS messages should be a prerequisite for general use.

Rajiv Gandhi, General Manager Business, Imago Screens India Pvt Ltd, explained, “Variable Message Signs are one of the key elements of traffic management systems. However, their potential has not been fully utilised by the users in India. These message signs should be used in Tier 1 and Tier 2 with particularly in crowded and business areas to reduce traffic time, pollution and harassment but with proper planning and complete technology transfer.”

Disturbances in the traffic flow by incidents must be informed correctly and immediately so that the drivers will have maximum time to reduce their speed and adapt their behaviour in other ways. This means that false alarms and misses must be brought down to an absolute minimum.

• Providing messages about services provided by a road authority during non-critical hours, such as carpooling efforts, travelers’ information stations

• Crashes, including vehicle spin-out or rollover

• Stalls affecting normal flow in a lane or on shoulders

• Closures of an entire road

The information comes from a variety of traffic monitoring and surveillance systems. It is expected that by providing real-time information on special events on the oncoming road, VMS can improve vehicles’ route selection, reduce travel time, mitigate the severity and duration of incidents and improve the performance of the transportation network.