Interview:?The Barco solution is based on the fact that making the right decision is about seeing it.?

Yamuna Expressway, in the State of Uttar Pradesh, is an ITS marvel. The 165kms long Expressway that was thrown open to the public on August 9 this year, and has cost the Jaypee Group `11,000 crore, is the country’s longest six-laned (extendable to eight lanes) access controlled concrete pavement stretch and is signal-free. It has reduced the distance between Agra and Delhi to around 211kms and the travel time between the two cities to 150 minutes, and between Greater Noida and the tourist hotspot to just 90 minutes. TrafficInfraTech took a ride on the Expressway on the eve of its inauguration. The Zero point being blocked for arrangements for the opening ceremony, the onward journey towards the control room at first main Toll Plaza located at Jewar (38kms from Greater Noida), took the vehicle through underpasses, service roads, the villages and of course, along Jaypees’s Buddh International Formula one track. Mangala Chandran on the experience and the technological marvel that is Yamuna Expressway. END_OF_DOCUMENT_TOKEN_TO_BE_REPLACED

Made of 99% recyclable materials, the MHTM MicroDrive barrier consumes negligible power and offers the users a saving of 75% in power consumption END_OF_DOCUMENT_TOKEN_TO_BE_REPLACED

‘Most highways are lacking in safety for road users’

Praveen Sood, ADGP (CCTNS) and Commissioner for Traffic and Road Safety, Karnataka feels that the first seminar to be held at TrafficInfraTech Expo, 2012 is important as traffic management on highways does not receive the attention it should. “There is an over emphasis on cities in our country,” he says. India had 1,33,000 deaths in road accidents in 2011. Roughly ... END_OF_DOCUMENT_TOKEN_TO_BE_REPLACED

Interview with: Sanjay Arora, “We will record a 20% increase in fines this year”

E-challans, sms alert systems, intelligent use of available space for parking and the ‘108 ambulance’ service have made a huge difference to Chennai’s traffic. Sanjay Arora, Additional Commissioner of Police (Traffic) tells Mangala Chandran that his department will put Integrated Traffic Management System in place in a few months’ time. END_OF_DOCUMENT_TOKEN_TO_BE_REPLACED

With 33,800 workers and 7,000 buses carrying 2.5 million passengers daily and covering 25 lakh kms a day, Karnataka State Road Transport Corporation (KSRTC) is one of the most profitable state transport undertakings in India today. Thanks to its Managing Director Gaurav Gupta’s pro-people approach and effort to leverage technology in achieving high deliverables, KSRTC has been termed as a trendsetter in the logistics of transporting people. The company has been making profits in the last few years – its last turnover was of र2000 crore. During the year 2010-11, it recorded the highest ever profit of र62 crore, thus wiping out the accumulated losses and making an accumulated profit of र43.75 crore in books. KSRTC is the first transport corporation in the country to have a Global Positioning System, General Packet Radio Service (GPRS) based passenger information and ITS system fitted in its vehicles. With its excellent track record in profitability, fuel efficiency and operational efficiency, it has achieved a position where other states look up to KSRTC for following its expertise in various fields. In an extended conversation with Mangala Chandran, Gupta unveiled his plans for making the success of KSRTC a global benchmark in Sustainable Transport. END_OF_DOCUMENT_TOKEN_TO_BE_REPLACED

New Initiative at Dubai Metro Integrating with other Modes of Transport 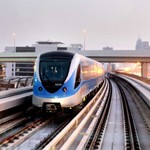 Dubai Metro, which promises to become the world’s largest Metro soon, will also be known for a unique initiative in the Middle East – the combi-card. This card will be a combination of a credit card and an electronic smart card that will enable commuters to pay for various transport modes in Dubai as well as use it as a credit card. END_OF_DOCUMENT_TOKEN_TO_BE_REPLACED

Today, nearly 50 major works related to surface transport are going on in Bangalore city - flyovers, underpasses, road widening and Metro work. Roads have been dug up for laying water sewerage pipe lines or power / telephone cables along 60km, which has affected 80 junctions. There are 70-80 junctions with traffic diversions. The number of vehicles on the roads has reached 35 lakh of which 75% are two-wheelers. There are 40,000 intersections of which at least 1000 require constant monitoring. Topping all these is the shortage of the police personnel. Yet, under the leadership of Praveen Sood, the Additional Commissioner of Police, Traffic, the Bangalore City Traffic Police has been keeping the city very much ‘under control’. Sood spoke with TrafficInfraTech’s Editor-in-Chief Mangala Chandran on the City’s Traffic Management Centre (TMC) and the adoption of technology to collect, process and disseminating traffic data. END_OF_DOCUMENT_TOKEN_TO_BE_REPLACED

The first technologically advanced acoustic barriers are being installed along Bandra-Kurla Link Road (BKLR), Mumbai by the “Fracasso” Group. The Group, a leading manufacturer of noise barriers and W beam crash barriers, is now in the process of introducing crash tested barriers and corrugated steel culverts in India. END_OF_DOCUMENT_TOKEN_TO_BE_REPLACED

Unfortunately, many drivers and riders, especially in developing countries, do not do any pre journey planning and driver training and discipline is limited. Add to that a rapidly growing vehicle population; with the result that countries like China and India account for the largest number of road accidents in the world – with India holding the dubious distinction of topping ... END_OF_DOCUMENT_TOKEN_TO_BE_REPLACED