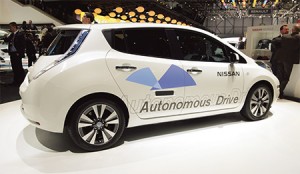 Some advocates claim that autonomous vehicles will reduce vehicle ownership and parking costs by allowing self-driving taxies to replace personal vehicles. It is estimated that, by allowing household vehicles to serve multiple residents, for example, first taking a commuter to work and then transporting other household member for errands, they could reduce vehicle ownership up to 43%, but increase travel per vehicle by up to 75%.

These impacts and benefits are difficult to predict. Many motorists prefer to own personal vehicles for identity (to display their style and success) and convenience (because they need specialized vehicles, leave equipment in vehicles or carry dirty loads). Shared autonomous vehicle cost profiles are likely to range between car-sharing ($0.60- $1.00 per vehicle-mile, including ownership, operation and administrative costs) and human-operated taxis ($2.00-3.00 per vehicle-mile including ownership, operation, administration and labor costs).

Personal automobiles typically cost about $4,000 annually in fixed expenses plus 20¢ per mile in operating costs. It is generally cheaper to use conventional taxis ($2.00-3.00 per mile) rather than own a personal vehicle driven less than about 2,500 annual miles, or rely on carsharing services ($0.60-1.00 per mile) rather than own a vehicle driven less than about 6,000 annual miles. This suggests that autonomous vehicles will be a cost effective alternative to owning a vehicle driving less than 2,500 to 6,000 annual miles, depending on cleaning and repair costs. Table 2 summarizes trip types most suitable for self-driving taxis, which represent a minority of total vehicle travel. Because of their additional costs and reduced passenger comfort and privacy, it seems unlikely that most motorists will shift from owning vehicles to relying on self-driving taxis.

Despite the progress made, significant technical improvement is needed to progress to achieve unrestricted operation of autonomous vehicles. Since a failure could be deadly to vehicle occupants and other road users, automated driving has high performance requirements. Sensors, computers and software must be robust, redundant and resistant to abuse. Several more years of development and testing will be required before regulators and potential users gain confidence that vehicles can operate as expected under all conditions.

When autonomous vehicles become a major share of total vehicle travel, they may significantly reduce traffic risk, traffic congestion, parking problems, and provide some energy savings and emission reductions. Transportation professionals will be involved in technical analyses to determine their actual benefits, and policy debates concerning whether public policies should encourage or require autonomous vehicles.

As previously described, autonomous driving capability will probably increase vehicle purchase prices by thousands of dollars, and may require hundreds of dollars in annual subscription fees for special navigation and mapping services. Although self-driving vehicles may provide large benefits to some users (high-income non-drivers, long-distance automobile commuters, and commercial drivers), it is unclear what portion of motorists will consider the benefits worth the additional costs. 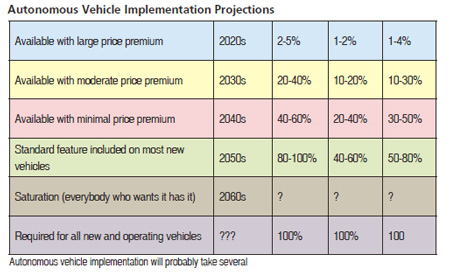