Bangalore?s Civil Society:Designs and develops a road while the government funds it

Tender SURE, an initiative of Bangalore City Connect Foundation along with the Government of Karnataka, the City Corporation and Bangalore Metro Rail, has changed the very premise and procedure of designing and maintaining roads. Implemented on Vithal Mallya Road, the City Connect project rests on one basic principle ? if people outside of government can work with the government on areas of urban governance, better and beneficial ways to improve the quality of life in cities can be arrived at. 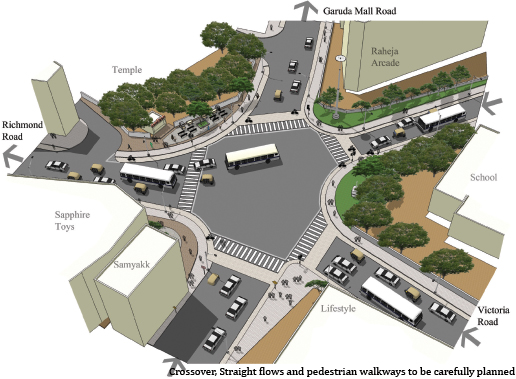 Mobility woes are similar across Indian cities. Our planners favour motorised private vehicles at the expense of other modes like public transport and non-motorised options such as cycles. Walking is not even considered a mobility mode and the walkers are often left to manage with what?s left of the road! Consequently, we see unplanned road widening projects to make more space for motorised vehicles. This is particularly the case for Bangalore where the government has experimented with TDR (Transferable Development Rights) as currency for road widening.

Bangalore also happens to be a test laboratory for a new experiment on ways to improve the existing road network using a new paradigm. This project, called ?Tender SURE? (Specifications for Urban Road Execution), is a work-in-progress initiative between civil society catalysed by business (the Bangalore City Connect Foundation – BCCF) and the Government (State of Karnataka), the City Corporation (BBMP) & Bangalore Metro Rail (BMRCL)). The idea of City Connect is based on a core premise ? if people outside of government can work with the government on areas of urban governance, there can be better, beneficial outcomes to improve the quality of living in cities. The City Connect members bring in ideas, angel fund proof of concept projects and involve volunteers.

The genesis of this initiative lies in a design project undertaken in 2009-10 on a 300 metre stretch of Vithal Mallya Road where a prestigious mall, UB City, is located. The developers, Prestige Construction, were keen to improve the road in front of the mall. BCCF got involved in designing the road and getting the multiple government agencies (BBMP, Water & Sewerage board ? BWSSB, Electric utility ? BESCOM, etc.) together to make the project a reality. It remains one of Bangalore?s best road stretches and proof that existing roads can be brought on par with international standards. Based on this experience, BCCF approached the Government of Karnataka (GoK) with a proposal. BCCF was willing to invest its money and effort in designing an urban road, tendering manual and doing detailed project reports (DPRs) for two-three roads if the government was willing to execute them from its funds. This was accepted and BCCF started work in late 2010 on the project, christened Tender SURE, with the technical assistance of the Indian Urban Space Foundation (IUSF).

Around the last quarter of 2011, the manual and draft tender documents were ready. The government, on perusing the documents, went ahead and provisioned nearly `300 crore (USD 60mn) to be shared by GoK, BBMP and BMRCL for about 50 roads in the city centre in their budgets in Feb 2012. BCCF was asked to provide DPRs for all these roads. BCCF offered to do about 15 road DPRs and peer review the other DPRS done by BBMP vendors in order to help build capacity in the system. As the details were worked out, it was realised that further budget provisions had to be made for the new utilities (particularly water and waste lines) and about 26 roads in all (30km) were considered feasible for execution with the budgets allotted. The current position is as follows ? 18 road tenders (about 21km) are underway and five road DPRs (5.5km) are ready for tendering.

BCCF?s Tender SURE is the third such street/road design initiative in the country. The earlier initiatives around the same period were by UTTIPEC in Delhi and ITDP in Ahmedabad. Indian cities need more such initiatives if the mobility infrastructure is to improve.

The key elements of the Tender SURE project for road design, tendering and execution are the following: 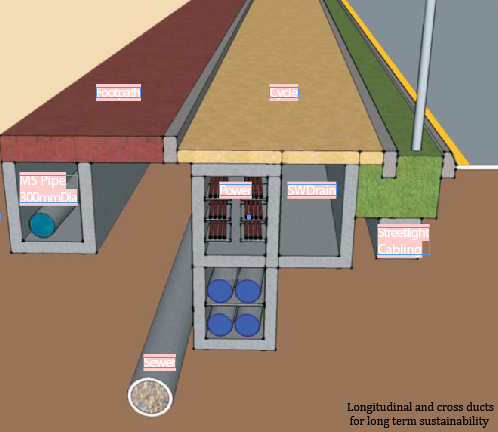 Pre-planning and detailing is key

Currently road projects in Bangalore are commissioned on very ?thin? project proposals. Sometimes they are started with just a paper sketch of what needs to be done. Under Tender SURE, Lincoln?s maxim of ?If I have 6 hours to cut a tree, I will spend the first 4 hours sharpening my axe? is followed. A significant amount of time is spent in planning what needs to be done including the studying of ground realities, soil tests, total station surveys, traffic studies, etc. The terms of reference were clearly spelt out leading to better contracts. While this should be par for the course in any road project, it is not done. Just detailing these aspects at the outset improves the odds of getting better outcomes.

Tagged with: Bangalore City Designs and develops Hierarchy of road