If all goes well, the first stretch of Bangalore Metro, called Namma Metro, from Byappanahalli (Old Madras Road) to M G Road will be inaugurated this year on Kannada New Year Day, April 4. Bangalore Metro Chief N Sivasailam, in his unique ways, has already begun carrying out inspection of various spots Bangalore Metro will run through. He often carries his camera along. Rehearsals for the big day have begun and cleanliness is one aspect Sivasailam is keen on.

Bangalore Metro, which will be completed in four stages, will go through the commercial and residential areas of the city. Phase I of the project consists of two corridors of electrified double line covering 42.30km. The East-West corridor, beginning from Baiyappanahalli and terminating at Mysore Road terminal, will be 18.10km. It will go via M G Road, the Vidhan Soudha, and Vijayanagar. The 24.20km long stretch of North-South corridor beginning at Nagadandra and terminating at Puttenahalli will go through places like Mahalakshmi, Rajajinagar and City Market. While most of the Metro will be on elevated area, a stretch of 8.822km will be underground near City Railway Station, Vidhana Soudha, Majestic and City Market. 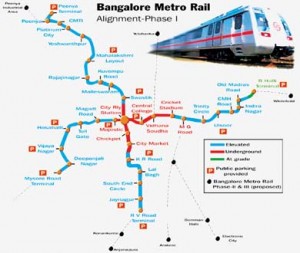 The Metro will run as an elevated metro rail on two double electrified lines (up and down lines) on a deck constructed on pillars erected mostly along the central median of city roads. This way, the road traffic will not be obstructed. The rails will be continuously welded to minimise noise levels. Tracks will be standard gauge (1435mm).

The first phase will have 40 stations spaced at an average interval of one kilometer. The frequency of trains would be every four minutes in peak hours and would go to three minutes later while the off peak frequency would be about 15 minutes. The trains would halt at each station for about 30 seconds. The passengers will have access to the stations through staircases, escalators and lifts. A trip on the East-West corridor would take about 33 minutes while that on the North-South corridor would take about 28 minutes. The maximum speed of trains will be 80km/hour with an average speed of about 32km/hour. The system will have a capacity of 40,000 PHPDT (peak hour peak density traffic) initially and will be expanded to 80,000 PHPDT later. It is expected to carry about 1.57 million passengers per day in 2011 and 2.57 million by 2021. Adequate parking space for vehicles and circulating areas have been provided for at all the stations. 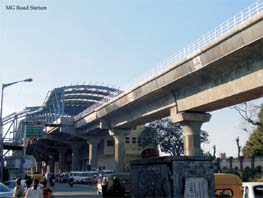 On reach R-1, Navayuga Engineering Company Ltd. (NECL) of Hyderabad is constructing the viaduct while Simplex Infrastucture Ltd will construct the 5.9km R-3 viaduct as well as the 5.5km R-2 viaduct. Hyderabad based company Nagarjuna Construction Company Ltd (NCC) has been awarded a contract to design and build the 3.6km R-4 viaduct.

Once known as the pensioner’s paradise, Bangalore has grown into a huge city today and is known as the IT capital of India. All major IT players and software giants of the world like Mircosoft, Infosys, Wipro, HCL, IBM, Oracle, Sun Mircosystems, HP, CISCO Systems, Accenture, Huwaei Technologies and Texas Instruments have their offices in the city. But the transportation infrastructure has failed to keep up with this explosive growth. With 35 lakh vehicles as against a population of 75 lakhs, traffic on most roads is about two-three times their rated capacity. Commute time has increased drastically with average speed ranging from 5 to 10km/hr. Safety situations have also worsened with the city witnessing 27 serious accidents a day with three leading to fatalities and 21, to injuries. A better, faster, safer and efficient public transport like the Metro was the need of the day. The aim behind the Metro is to encourage the average Bangalorean to keep his vehicle parked at home and ease traffic congestion. Positioned as a complementary, rather than competitive mode of transport, the Bangalore Metro will work in tandem with other transport systems like buses and mono rails.

Bangalore Metro took nearly 29 years to fructify in some form or the other since the idea was conceived. To alleviate the traffic problems in the city, several Mass Rapid Transit Systems (MRTS) have been proposed over the years. A study had suggested a 12.20km long MRTS in 1982 itself. Suburban rail services on the existing lines and a circular 57.9km Metro railway system on two corridors in two phases was recommended in 1983 by the Metropolitan Transit Project, an organisation of Indian Railways. Five years later, RITES, in a World Bank aided study, recommended a Commuter Rail System and an improvement of the road system. In 1994, the Karnataka government established the Bangalore Mass Rapid Transit Limited (BMRTL) to implement the suggested mass rapid transit system. This was renamed in 2005 as Bangalore Metro Rail Corporation Limited (BMRCL). In 2003, the Delhi Metro Rail Corporation (DMRC), in partnership with RITES, prepared a Detailed Project Report (DPR) for Bangalore Metro Rail. It proposed two double line corridors: East-West (EW) and North-South (NS) with a total length of 33km. Bangalore Metro Rail took off only in March 2005 with the Karnataka Government clearing the project in March, 2005. Its trial runs are now on.

Each Bangalore Metro train will consist of three cars – Drive Motor Car (DMC), Trailer Car (TC) and a Driver Motor Car (DMC). With a length of 20.8 metres, width of 2.88 metres, height of 3.80 metres and axle load of 15 tonnes, each coach 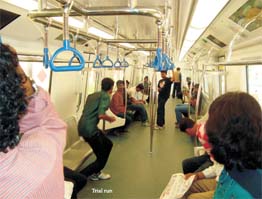 will have stainless steel body, air conditioners, wide windows and eight automatic access doors. The train will have a maximum acceleration of 1m/s2 and a maximum deceleration of 1.1 1m/s2. Each coach, with a capacity for 50 seats, can additionally accommodate 306 standing passengers. The total capacity of each train is 1000 passengers per train. Passengers will be seated in longitudinal rows with wide seats for comfort. The interior panels, with a smooth finish, will also be resistant to graffiti writing. Later, the four coach trains will be upgraded to six coach trains with a capacity of 2068 passengers. The trains will also have non-slip and non-skid floors with wide passage ways between cars to allow free and safe movement of passengers.