With the inauguration of the much-awaited Signature Bridge in November 2018, India completed its first asymmetric cablestayed bridge. Since its conceptualisation in 2004, the project’s journey had been marred by several challenges, both administrative and technical. Despite the delay, the bridge, an architectural marvel, boasts of several unique features and has seen the involvement of various companies across the globe.

Implemented by the Delhi Tourism and Transportation Development Corporation (DTTDC), the 575 metre Signature Bridge links National Highway-1 near the existing T-point at Wazirabad on the western bank of the Yamuna river to the Marginal Bund road at Khajuri Khas on its eastern bank. The main span of the bridge is 251 metres, while the side spans have a total length of 324 metres. The bridge’s composite deck has eight lanes, four in each direction. It is 35.2 metres wide and is supported by lateral cables – 30 on the front and 8 at the back – placed at 13.5 metre intervals.

One of the most striking features of the bridge is its inclined pylon. The height of the steel pylon is 154 metres, more than double the Qutub Minar. The top of the pylon is formed by a steel-glass structure which includes a viewer’s deck. Around 14,500 tonnes of structured steel and 6,300 tonnes of reinforced steel has been used in construction. For the first time in the country, E355 grade steel has been used for the pylon work of a bridge.

Challenges on the way

The journey of the project, right from conceptualisation to construction, was with several challenges. One of the major issues faced in the initial stage was that of obtaining the forest clearance. While DTTDC had applied for the clearance in 2007, it was only granted after a five-year period in 2012. “Geological surprises and the consequent need to redesign and execute foundation P-23 of the bridge proved to be a major challenge,” says Shishir Bansal, Chief Project Manager, Wazirabad Bridge Project, DTTDC. After carrying out the soil investigation, it was revealed that the rock profile of the area was steeply sloping, thereby warranting a change in the design of the foundation P-23.

In August 2012, a proposal for an integrated well-pile foundation was approved and the well sinking started. In December 2014, Gammon India acquired two new reverse circulation drilling rigs from Korean firm Buma CE. These rigs were used for undertaking piling work on the sloping rock terrain. The piling work was completed within a span of 16 months. With this, the Signature Bridge project became the second bridge project in the country to feature a combination of well and pile foundations. This extensive piling and well foundation support P-23 and carries most of the 6,600 tonne uplift load exerted by the cable-stressed pylon for the main bridge.

Another major challenge was the identification of a workshop for pylon fabrication. After extensive research, the decision to get the entire steel fabrication in ZTSS workshop at Jiangsu province in Shanghai. The entire steel fabricated components were transported from Shanghai to Kandla port in Gujarat in six consignments. It was then transported from Kandla to Wazirabad in Delhi to the bridge site, covering a distance of 1,640 km by road. The base was transported in modular trailers with 12 axles and 168 wheels with each axle having independent hydraulic arrangement. Transportation of the shipment was done mainly at night. A separate bypass had to be set up enroute besides bridges, roads and toll plazas for facilitating the movement of overdimensional cargo. 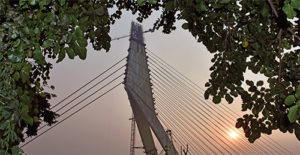 “The welding of the first segment (L0) with the base of the pylon posed another major challenge as it required the welding to be done at a very sharp acute angle,” explains Bansal. “As welding plays a major role in the overall stability of the structure, no shortcomings in the quality were acceptable,” he adds. However, this issue was overcome with the assistance of German experts.

Meanwhile, the cost of the bridge, as per the escalation clause of the agreement, escalated from the initial estimate of Rs 11.31 billion to Rs 15.18 billion. Receiving a sanction for the revised project cost proved to be another hassle for DTTDC. Further, the invocation of the corporate debt restructuring and strategic debt restructuring schemes for the debtladen contractor further threatened project execution.

Key advantages of a typical cablestayed form are as follows:

• much greater stiffness than the suspension bridge, so that deformations of the deck under live loads are reduced
• can be constructed by cantilevering out from the tower – the cables act both as temporary and permanent supports to the bridge deck
• for a symmetrical bridge (i.e. spans on either side of the tower are the same), the horizontal forces balance and large ground anchorages are not required

Unique factors of this bridge

• It is the first asymmetrical cablestayed Bridge in India. In addition, the Pylon is more than the height of the Qutub Minar.
• It shares the traffic burden of Wazirabad bridge. Furthermore, the bridge shares the burden of traffic that the wazirabad bridge is bearing alone. The bridge connects the outer ring road on the western bank, with the Mangal Pandey Marg on the eastern bank of the yamuna.
• The bridge is constructed in two parts, whereby the first part is inclined at an angle of 60 degrees while the second part is almost vertical. Due to this, the tower will appear to be in the shape of a bow, due to which the tourists will have to change the lift to ascend to the gallery perched above. Due to the inclination of the tower, the motion of the lifts will also be inclined.
• Considered to be an engineering challenge to construct the lifts ascending in inclined motion. Each of the lifts has capacity to carry four to six people at a time.
• It reduces the time travel by at least half an hour for commuters going to Ghaziabad and Bhopura Border via Khajuri Khas, from Wazirabad, Timarpur, Mukherjee Nagar and Burari.

Despite all the challenges, difficulty in getting environmental clearance, geological surprises, the project has finally been opened for public use. Further, the installation of highspeed lifts, pylon maintenance units and flooring, roof and glass facade of the observation deck will take about couple of months to complete. Once completed, the bridge will be handed over to the PWD for maintenance. The government has also laid out plans of developing the landmark bridge into a prominent tourist destination by enhancing its aesthetic features. Though the iconic structure has opened only recently, rash driving on the bridge have come to the fore. To address these concerns, several suggestions such as fixing a speed limit and installing speed breakers on the bridge have been mooted.

Previous: CCTVs, panic button on every third bus seat in DTC buses
Next: #BettertheBalance: What women want from their urban mobility systems