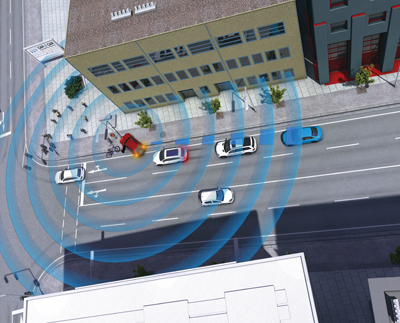 The connected vehicle is one of the most fascinating challenges the automotive industry is faced with. Vehicles communicating among each other and with traffic infrastructure are expected to enhance traffic safety, efficiency and travel comfort ? not only for drivers of automobiles, but for variant classes of traffic participants. European vehicle manufacturers, the infrastructure industry, their suppliers, road operators and research projects set the course for the implementation of co-operative systems ? to make the mobility of the future a connected mobility.

For a long time, cars talking to cars sounded like an imagination of the remote future. After a long period of basic research, this imagination comes closer to reality. Several European projects have tested and validated the functionality of cooperative Intelligent Transport Systems (C-ITS) ? those systems enabling the interconnectivity of vehicles and infrastructure. They are expected to enhance traffic safety and to contribute to the vision of reducing fatal accidents on European roads towards zero. Passive safety measures like seat belts, airbags, crumple zone and driver assistance systems like electronic stabilisation programme have indeed reduced the severity of accidents, but their frequen-cy has kept consistent. C-ITS complements existing safety measures with a preventive character. They support the driver at the outset in deciding how to react ? with the consequence of avoiding collisions.

How does C-ITS offer this support?

In a connected mobility scenario, vehicles ? cars, utility vehicles, trucks, busses, motorcycles ? and the traffic infrastructure are equipped with ITS stations. ITS stations constitute sender and receiver units, establishing an ad-hoc network based on ITS G5 wireless communication, and exchanging local real-time data. Vehicles are able to share their position, speed and direction, while Road Side Units (RSUs) in the traffic infrastructure communicate information such as the signal phase and timing of traffic lights. These processes are described by the acronyms V2V (Vehicle-to-Vehicle) and V2I (Vehicle-to-Infrastructure) communication or, to summarise them both, V2X communication.

Due to the analyses of the data, cooperative systems inform the driver about current traffic conditions ? speed limits, road works, traffic jams or broken down vehicles blocking particular routes. In case the driver is approaching a dangerous situation, the system warns him ? e.g. if they are approaching the end of a traffic jam, or if a vehicle in front is braking hard, or if there is a risk of over-looking a vehicle in a blind spot. By displaying this information on a Human Machine Interface (HMI), C-ITS supports drivers in deciding how to react, e.g. slowing down in a timely and safe manner. This is a deciding feature of cooperative systems, above all when it comes to questions of performance requirements and liability: C-ITS informs and warns, but it remains up to the driver if and how they react. An autonomous intervention, like an automatic emergency brake, is not provided for in cooperative systems in their first implementation stage and requires redundant sensor information.

Enhanced traffic safety is not the only positive mark C-ITS systems are expected to make on the mobility of the future. Informing drivers about traffic conditions can also lead them to drive with lower environmental impact, for example by informing about the optimal speed to pass a traffic light in green phase ? avoiding abrupt speed changes, high emissions and supporting a consistent traffic flow. With an efficiency focus, C-ITS also facilitates the usage of different means of transportation, such as by hinting at Park & Ride options, informing about the time of departure of public transport, flights or trains ? at the same time giving options for enhanced travel comfort.

Do only motorised traffic participants benefit from C-ITS?

At first, the advantages of C-ITS to traffic safety seem mostly relevant to motorised traffic participants. And yet drivers are not the only beneficiaries of cooperative road traffic. Cooperative applications of public interest include opportunities to support the prioritisation of public transport at traffic lights.

Interconnected vehicles also facilitate emergency vehicles passing through intra-urban areas: Displaying the information of an emergency vehicle approaching from behind and of its driving direction helps drivers in evacuating rescue lanes.

Some innovative research projects suggest that the opportunities of C2X as basic system could be even wider: Imagine the challenges persons with disabilities, for example blind and visually impaired people, are facing as traffic participants. Even if traffic lights in intra-urban areas support them by an acoustic signal, crossing intersections remains a stressful situation and their mobility is often restricted to trained routes. The German R&D project InMoBS (Intra-urban Mobility support for Blind and visually impaired people) attends to their needs and uses V2X communication to help them crossing intersections safely. The project partners have developed a prototype mobile device for the blind and visually impaired to carry with them. The device ? for example a customary smart phone ? localises the person based on GPS and cellular service. It additionally receives signal phase and timing and intersection topology messages from cooperative traffic lights which can be transmitted to the blind or visually impaired person haptically and acoustically.