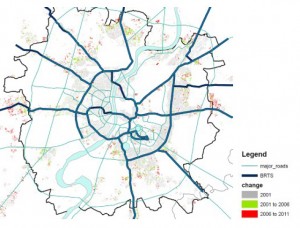 The BRT network is designed to connect the important origins and destinations and transit points like railway stations, regional bus terminals, university areas, industrial areas, residential (EWS, LIG, MIG), commercial hubs of the city and recreational public spaces like Kankaria lake front. The idea was to increase mobility and accessibility to all these origin and destinations through a well-connected network of BRTS.

Augmenting city road network has been achieved through selection of wider roads (first phase) or through creation of additional capacity through widening of road, completing missing links, adding an ROB/underpass to cross over rail line or building elevated road, and using all or part of the additional capacity for BRTS. Developing entire RoW with pedestrian facilities, developing public spaces opting for a complete BRT system (trunk and feeder) and extensive public outreach (public exhibitions, trial runs, media) are some of the important elements of the system. The other elements are central segregated bus lanes, median bus stations fully equipped with Intelligent Transportation Systems. The BRT system in Ahmedabad operates as a ‘closed system’ which means that only specially designed BRT buses are allowed to ply on segregated lanes.

It was important to connect the busy public destinations and hence while selecting roads along BRT corridor, ‘Connect busy places but avoid busy roads’, has been the policy. The planning of BRTS network focused utilizing non-busy roads to connect key destinations. The project therefore received acceptance from non-PT users society as well. Ahmedabad’s BRTS has expanded continously since 2009. A new stretch for 4.5km is now open connecting Ahmedabad to Bhopal. This will provide connectivity to Sanand in future.

When Ahmedabad represents itself as a successful model for BRTS in intra-urban transit in Indian context, Surat BRTS has opened up new opportunity for people to commute by reorganizing city road network as well as new mode choice. In Hubli-Dharwad it’s a well-planned BRT infrastructure for intercity sustainable transit to serve as high as 15000 PPHPD (Passengers Per Hour Per Direction). 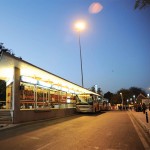 he corridor also provides connectivity to the lower income housing areas and increases accessibility for the lower and middle income groups. The stretch between Pirana to Shah-alam that connects the western part to the eastern part of the city was recently opened up for operations and was well received by the citizens. 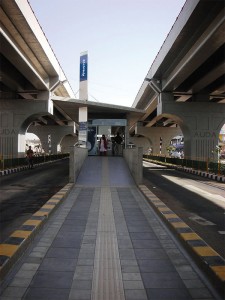 Development of BRT infrastructure with a projected future demand was a critical factor for BRT corridor selection in Ahmedabad, though existing and potential demand was the prime consideration. The corridor passes through areas having many vacant mill lands on the eastern part of city, with a scope for future development. With BRT corridors as a catalyst, land use transformations have already begun along corridors. The open lands of university areas and major junctions on the 132’ ring road have transformed into University convention hall, commercial malls and office buildings. Hence, it can be said that supply creates its own demand.

Strong will and support from a people’s representative is essential for a success of a system. Ahmedabad BRTS was strongly supported by the Prime Minister Narendra Modi. Also, Municipal Corporation took full ownership of the system for implementation and operation. With strong political will and technical expertise, the city implemented the first full-fledged BRT system of India.

Over the span of six years, the service is very popular and is now a highly respected and valued brand in Ahmedabad. It connects diverse areas ranging from all socio-economic sections of the city and values the needs of people with fewer mobility choices. The system is being upgraded with integration with city services. Intensive public outreach has been carried out throughout the implementation and system operations. The acceptance by the people of Ahmedabad has ensured success of the system.