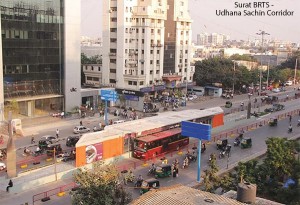 The city of Surat, with a population of 4.46 million (2011), has faced inadequate, discontinuous supply of public transit system in the past. The city largely depends on 3- wheelers acting as para-transit and private vehicles as chief mode of transport. In 2008, the Comprehensive Mobility Plan (CMP) looked at structuring regional connectivity and city road network, improving network inadequacies, land use – transport integration and sustainable transport solutions. As a sustainable and smart mobility solution for future, Surat prioritized implementation of BRTS.

A total of 99 km of BRT network was planned, of which 30km is developed and operationalized under Phase – I. 10km of stretch is operational since 26th January, 2014 and 20km of corridor along existing canal was operationalised on 20th April, 2015. Remaining 69km is under different stages of implementation. The system is widely accepted and used by all classes of people from the society and is named ‘Sitilink’. The system is operated as closed system, planned and implemented as complete surface development with provisions for NMT (pedestrian pathways and cycle tracks).

The Sitilink project not only developed the BRTS corridor but also addressed the growing demand for mobility in the city. Prior to BRTS, the city had limited roads for mobility opportunity. Hence, the network was planned through development of missing road links, inclusion of new river bridges, canal road and ROB. Development of canal road and middle ring road provided the city, a major relief from traffic logging. The traffic situations are expected to be improved further after completion of two river bridges and the commencement of phase 2 corridor operations.

12km of the total the 30km operational BRTS in the city is the first water front BRTS implemented in India. The bus stations are planned across the existing canal. Recreational facilities like kiosks, gardens, children play area, seatings, etc are also planned along both the sides of the canal which are under different phases of implementation. The BRTS has not only provided transit facility but has also enriched the social life of citizens. 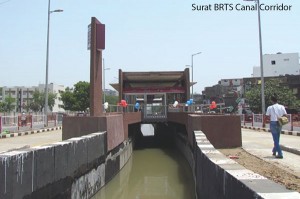 Efficiency of public transit system depends on its coverage and connectivity. Each system has its own capacity, limitations and requirements. The City has two layers of bus based transit systems i.e. city bus services and BRTS. A third layer of bus system, ‘high mobility corridor – walled city ring service’ is under planning.

It is observed that bus transit development results in changes in the land use and built form. It has also been observed that when development concentrates along BRTS corridor, transit patronage increases. In view of this, it is imperative that the potential of land use transformations be exploited to strengthen public transport mobility. Surat had allowed for a purchasable additional FSI along BRTS corridor. A favorable demand for the land along BRTS has already collected over USD 34 million by Land value capture which is accumulated in Urban Transport Fund (UTF) for BRTS implementation, operation and management. This has helped Surat Municipal Corporation to provide reliable services with an affordable fare structure.

An interesting feature of Surat BRT network is the choice of incorporating a stretch of existing canal of the city as part of its network. Canal was perceived as an opportunity not only for BRTS network but also city wide network improvement. Overall, BRTS has increased the road utility and capacity by assuring sustainable mobility security.