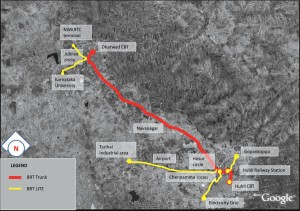 Hubli and Dharwad are twin cities in the state of Karnataka. The Municipal Corporation has a population of about 10lakh and covers an area of 202sqkm out of which developed area is approximately 72.78sqkm. Hubli being the centre for trade and commerce and Dharwad, the district administration and educational seat, continue to attract large volumes of traffic both from outside and within the region. Both centers are 22 km apart and the two cities are merging to form a linear urban continuum. The gross densities are expected to go up from the current 47 persons per hectare to 76 persons per hectare.The upcoming activity areas in the cities will have implication on travel demand in the future.

About 60-70% (2.1 lakh pass/day) of the passenger traffic between twin-city is currently catered by NWKRTC, a road based public transport. Though increasing transit demand, private vehicle ownership and development along highway have forecasted upcoming major challenges to inter-city and urban transit. Various initiatives have been taken up by the state government agencies to address issues of urban transport in Hubli Dharwad including proposal for BRTS.

Hubli-Dharwad is proposed as ‘trunk and feeder’ type of service, where the trunk corridor links both the cities. The trunk services will be supported by feeder services as last mile connectivity. Commuters transfer to a feeder service, which may be at the terminal location or at an important node.

The BRT corridor has the maximum ridership with significant boarding of 65% while around 23% of the total ridership will be catered by the feeder routes. The travel time savings in comparison to non-BRTS scenario is around 20%. It indicates that BRT services with coordinated BRT lite/ feeder routes would bring in significantly higher benefits. It is therefore proposed to rationalize the bus routes in the City so as to bring in efficiency in terms of travel time.

Number of bus lanes to be provided at bus stations and at mid-block is a major decision taken forward for Hubli- Dharwad BRTS. Normally, one bus lane in each direction is considered sufficient for mid-block sections. Overtaking lanes are provided at bus stations to increase capacity by running express services. With the PPHPD (passengers per hour per direction) capacities to be catered by BRTS with 62% long distance trips held by express services, a physically segregated right of way with more than one lane is recommended along with passing lanes.

Hubli-Dharwad with an estimated demand of 6600 pphd in the base year, has the challenge of catering to more than 12000 passenger traffic in the next ten years. In base the year, it is estimated to have 100 buses per hour in the peak hour. A micro simulation exercise was done to understand the implications of the number of lanes. Average speeds of 27 and 32kmph were considered for local and express services and the number of overtaking spots was calculated along the corridor. It was observed that in peak hours, overtaking may happen at five locations by each bus which would vary for each bus, depending on its schedule. However, four lanes cannot be provided in the 24/30/35m RoW sections. Still 3-lanes are accommodated for in 35m corridor for operational efficiency.