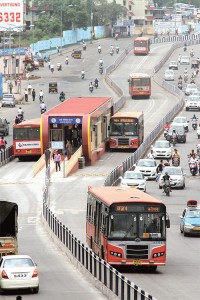 Pune was the pioneer BRT city in India. However it has not been a smooth ride for Rainbow BRTS in the Pune region, starting with the Katraj-Swargate-Hadapsar pilot project (2006) which faced flak from all sections of the society for not having met the expectations and promise of a high quality service. Times have changed and between 2006 and 2015; six other cities (Ahmedabad, Rajkot, Indore, Surat, now Pune & Pimpri-Chinchwad) have launched BRT with distinct features. ‘Rainbow’ is the new BRT System launched in the Pune region. The combined vision of Pune and Pimpri Chinchwad Corporations and the Pune Mahanagar Parivahan Mahamandal Ltd. (Public Transport Utility) will help realize a network of 115km of BRT in the Pune region thus making Rainbow one of the largest systems in Asia. Rainbow received the unique recognition for being the first of its kind of smart bus service in the state of Maharashtra. Rainbow BRTS is essentially an integrated network of safer, faster, affordable and more efficient public transport system. While the dedicated lanes ensure that BRT buses are able to run efficiently and rapidly, the common median stations allow passengers to transfer between routes with ease.

Apart from the financial support provided by institutions such as the World Bank (in addition to the contributions by Central and State Governments) thereby lending credibility to the project, various initiatives taken by the respective local government bodies have initself provided a shot in the arm to ensure the success of Rainbow BRT System. One such bold step has been Branding, Marketing & Communications planning undertaken by both the City Corporations to support the public transport utility.

The service brand name ‘Rainbow’ with the tagline Pravas Nava, Paryay Nava (meaning New Journey, New Solution) was one of the many outcomes which have been used in all communication materials developed for dissemination in the public domain. 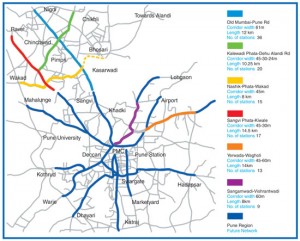 Tours of the BRT system during trial runs with specific influential or potentially impacted groups for a hands on experience was found to be one of the key strategies to help alleviate and address concerns. Promoting BRTS experience through free rides was another strategy. However, unlike Ahmedabad, Pune already had an established high public transport demand on the proposed corridors and therefore an informed decision to curtail the free ride period was taken. But this did not deter the passenger ridership and Rainbow BRT continues to enjoy a growing patronage. The combined average daily ridership on the two corridors had jumped from 0.8 lakh to 1.1 lakh at the end of the first month. Changes are expected in the first few months considering the time take for the system to stabilize along with experimentations of route structures. The biggest pluses for commuters have been the availability of real time bus arrival information at stations and the ease of boarding and  alighting on the corridor as a result of the at level interface.

Reflecting the striking system features, the logo and name ‘Rainbow’ seeks to signify a joyful feeling. From open shelters and poles demarcating stop locations to closed stations with route information, real time updates and signage the expectations of commuters is set to increase

Learning from the past experience, setting the expectations right through communications has been a conscious decision taken during campaign implementation. And so Feedback Management was a crucial element of the communications strategy. Specifically for public transport, trust and reliability of the system are built through transparent means for registering complaints, suggestions and seeking responses or timely actions. Thus Website & Social Media (Facebook) established itself as powerful communication tools to connect with commuters and citizens in the pre-launch and post launch phases of Rainbow BRT. While the website boasts of 14,000 plus views, 162 comments and nearly 6000 visitors, the Facebook page of Rainbow BRTS has reached to one lakh people and received over 1500 likes in a span of two months. Enthusiastic commuters and non-commuters alike have shown varied interest in the project and are increasingly demanding for the expansion of the system to other parts of the city.

Operating daily from 5:30am to 11:30pm, and with over one lakh commuters on 15 bus routes, connecting popular destinations and a corridor frequency of one bus a minute, Rainbow BRT has made a strong case for continued investment in Public Transport and the need for focusing on mobility of people over mobility of vehicles. The first month of operations saw a nearly 20 percent jump in ridership. Though the system has received a decent rating for its performance in the first month, a number of concerns remain to be addressed and it will require a robust mechanism of checks and balances. A third BRT corridor in Pune region, Nashik Phata to Wakad, is readying for launch and this will further increase the service coverage and public transport mode share. By making room for smarter transport and reducing the focus on personal vehicles, the twin cities of Pune and Pimpri-Chinchwad have made a strong statement.

Nitin Warrier, is Transport Planner, IBI Group with over ten years of experience in advocacy and consultancy on Sustainable Transport Projects. IBI Group with the support of Center for Environment Education (CEE), is a consultant to Pune and Pimpri Chinchwad Municipal Corporations for the Promotions & Outreach of the BRTS.