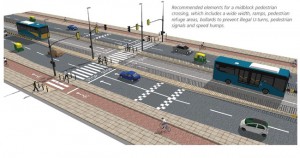 The 2009 study by EMBARQ, WRI India and CST India on the Delhi bus corridor found that despite its successes, the pilot project had experienced several setbacks during the first months of operation which included congestion in non-bus lanes, frequent bus breakdowns in the segregated lanes, confusion over bus entry and exit points, unauthorized pedestrian crossings (jaywalking) and faulty traffic signals which led to customer dissatisfaction.

Four critical suggestions can be made to overhaul the bus operations in Delhi BRT in its next iteration.

Two, Services need to be adjusted to meet demand. Officials should step up services to meet demand as pinpointed by the key indicators, and reduce off-peak services. An example would be to have flexible route planning — namely, using short-loop routes and express routes to bypass certain stations.

Three, Customer satisfaction should be ensured by offering clean, reliable, fast, safe and comfortable service. Advanced GPS systems to manage operations in real-time, convenient location of terminals w.r.t other mass transit operations for easy transfers can improve effectualness. Terminals need to be built wider and longer to avoid crowding. User-information should be made easy and readily available to help passengers find their way around without difficulty.

A BRT system is the amalgamation of stations, vehicles, services, running ways and information technology which all work in tandem. Its stand out for their flexibility, relative low cost, and rapid rate of implementation.

Four, efficient image management is required to ensure that both citizens and the government support the relaunch of BRT so as to counter the negative initial response from some media outlets and opinion makers that led to a political firestorm in the first edition of BRTS. A sophisticated marketing strategy can help promote not only the bus corridor and its benefits; branded buses, terminals, maps, websites, videos, and educational messages are a part of this strategy.

Delhi adds about 1400 cars every day and therefore, we must not make the mistake, committed the world over, of expanding roads to tackle vehicle congestion. After decades of building and maintaining expensive urban highways, many cities, including San Francisco and Seoul, are choosing to tear them down to gain social, economic and environmental benefits.

BRTs reduce the need for car travel, mitigating air and noise pollution, thereby, greenhouse gas emissions. They also reduce accidents and ensure much-needed physical activity. They ensure inclusivity by ensuring better access to jobs and other benefits of city life to all citizens irrespective of age, gender or ability.

BRT needs to be considered as a major aspect in the urban mobility portfolio of Delhi, and India at large. With the decision by the government in the capital to learn from past mistakes and start afresh to build a better BRT in the coming months, let’s hope that a comprehensive system will take shape to address the traffic woes of the city.