The new smartphones should finally be the tools that bring computers and connectivity to the masses. Given the cost of computers and the unreliable supply of electricity in India, computers and internet have been mainly available to a select few. Now, with the prices of new smartphones dropping to the sub-6000 zone, there is a new wave of technological revolution that promises to take the cell phone phenomenon a notch higher.

As the number of applications that enable various functions through mobile phones is on the rise, the handset has transcended its role of simple communication since quite some time. India is a leading user of smses (short messaging services) in the world! And children seem to have an intuitive knack for understanding and using the new applications on phones. Google’s introduction of the open source Android operating system has created an ecosystem equivalent to the introduction of the PC.

We believe that mobile telephone can be developed into a very powerful instrument to promote sustainable mobility in metros for various uses such as Bus Route Information, Radio Paging and Ticket Payment. 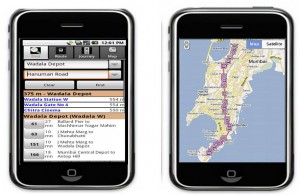 Mumbai has 4000 buses, over 400 bus routes and 5000 bus stops. Finding the bus routes from these is a complex and difficult task. The situation in other metropolitan cities would not be very different. There are too many destination specific routes but not enough directional routes to offer high frequencies. Most of the time, even bus users living in a particular area aren’t aware of the buses that can take them to their destinations. In frustration, they end up using cars or taxis/autos.

During the non-peak hours, buses are mostly empty. This time offers an opportunity for those who use their cars or autos and taxis for commuting to look at the bus as a money-saving alternative. That it will reduce congestion in the city, is an added advantage. A well designed software application for this purpose can be of great help to such potential bus users.

Fortunately, an application for the Android platform is available for free downloading in the Android Market (Best Bus Route Finder). The MESN website (www.mesn.org/bestbus) also provides information on which route a commuter can take from his/her current location to the desired destination. The software, developed by Chetan Temkar, covers almost all the 4000 bus stops with their latitude/longitude coordinates. The ‘Chalobest’ Route Finder (previously BestBus Route finder) is location aware. What that means is that as soon as the commuter starts the software, it recognises the location he/she is at and immediately shows him/her the bus stops around the location and the buses available with the first and last stops of that bus route. It also guides on the bus route to be taken from the nearest bus stop to the desired location. The software also tells if the commuter needs to change a bus in case of non-availability of a direct bus serving the desired destination. It shows all the stops on the desired route. It also tells the distance of the nearest bus stop from the location of the commuter in metres and the distance between each stop.

This is the first step in providing route information to irregular travellers. Apart from learning about the nearby bus stop and availability of buses at the said bus stops, it also helps in optimising the journey by figuring out the most direct routes to a commuter’s destination. This can usher a cultural change in the mindset of people.

When will the next bus come for Me?

The next logical and an essential step is to provide the information on when the next bus will arrive at the bus stop where a commuter is standing (or at the bus stop nearest to his/her location). MESN has developed a prototype which can track the movement of a bus and relay it through its servers to the passengers at the bus stop. So, when a passenger queries a route, he/she will also see when the next bus would arrive at their stop. This can be the single most important development in the marketing of the bus system – especially for AC and corridor buses. The information can be made available at the bus stops as well as through the mobile phones. In the first phase, this system can be made available to about 300 AC buses and a few hundred corridor buses. It will make bus travel appealing to non-traditional users which, in turn, is critical to support migration from private cars to public buses. Thus, technology can be used effectively for sustainable mobility. The cost is quite small and the time frame, not wide either. But it requires mind space.

Radio Paging for all taxis and autos

Today, in all the metros a few private operators rely on the radio paging facility for fleet taxis. Since it is a limited service, it does not cover a large proportion of independent taxis and autos. Bangalore, which has managed to bring a large number of taxis under the ambit of radio paging and apparently will extend the technology to autos as well, is much ahead in this area. It is possible to provide this alternative in the form of a common service to all independent taxis and autos using smartphones. In the general scheme of things, the cost of the phones is insignificant and would be recovered in a few weeks.

It is necessary for the unified traffic management of a city (consisting of traffic police, RTO and Municipal corporations) to provide this service to the entire trade. A common service provider can be assigned the task for which initial investment should be made by the RTO/Municipal Corporation and thereafter, a nominal service fee either per month in the form of rental or one/two rupees per use can be charged from the taxi /auto owner. It can then be added to the fare. This concept can then be extended to the sharing of taxis/autos where passengers can be picked up from designated areas based on the destination of the existing passenger.

One more system that can improve convenience and reduce people’s travel time/fatigue is provision of railway tickets on mobile phones. Buying a pass is a periodic, once-in-a-while task but buying a single ticket is a tedious and time consuming experience which often discourages people from using trains. If the commuters could buy a ticket by sms or using a mobile phone application, it would increase the usage of public transport. For this purpose, the user must have a prepaid account. And he/she must send a sms to the designated four digit number giving details of the starting and ending destination stations. The reply on the phone would be a ticket valid for a period of two hours. The money would be debited by the system and credited to the railways. The concept can be extended to parking & tolling payments as well.

Thus, mobile phones can be very effectively used for tracking buses and planning journeys. It is not a new concept – it has been adopted in many countries. It is high time that India, and of course Mumbai, adopt it too.

Previous: The BMTC Experiment
Next: Boosting Public Transport in Dubai