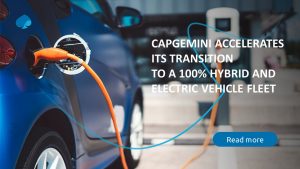 Global experts are more concerned than ever about the impact of carbon emissions on climate change and its consequences, a few global leaders are committed to making bold moves to accelerate the transition to a more sustainable travel model.

Capgemini has announced that it will now only order hybrid and electric cars and vans for its 12,000-vehicle company fleet, stopping with immediate effect the order of new pure diesel or petrol vehicles as it transitions to a fully electric fleet by 2030. The company claims that the initiative supports its ambition to achieve carbon neutrality for its operations no later than 2025 and to be net zero by 2030.

Capgemini has also joined the EV100 global initiative, which brings together companies making the switch to electric vehicles (EVs).

Capgemini has stated that it is significantly increasing its investment in electric charging points as well.