Public Bicycle Schemes are a great way to popularise the use of bicycles among the youth as well as working professionals. Ranjit Gadgil, Programme Director, Parisar, a Pune based NGO, discusses these schemes around the world and the challenges in implementing them in India. A study by the Ministry of Urban Development in 2008 revealed that cycling had dropped from ... END_OF_DOCUMENT_TOKEN_TO_BE_REPLACED

The North-South Bypass Tunnel (NSBT) runs for approximately five kilometres from Bowen Hills to Woolloongabba in Brisbane, Australia. Consisting of two tunnels, one for north-bound and one for south-bound traffic, it will be a cross-city link eliminating up to 18 traffic lights and reducing travel time by up to 15 minutes. The ventilation shafts and stations are part of the ... END_OF_DOCUMENT_TOKEN_TO_BE_REPLACED

Faced with a large scale increase in the number of private vehicles, rising traffic pollution, constant increase in fuel prices and growing traffic pollution, the European Commission – the executive body of the European Union – launched the Archimedes Project in 2008 under the City-Vitality-Sustainability Plus Initiative. Slated to be completed by 2012, Archimedes has promoted clean fuel environment-friendly vehicles and non-motorised transport, and at the same time, introduced innovative measures to reduce traffic congestion and enhance commuters’ safety. END_OF_DOCUMENT_TOKEN_TO_BE_REPLACED 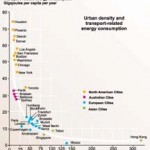 The adoption of faster modes of transport has changed profoundly the spatial organisation of cities. The increase in average speed of a city's transport system calls for more space. The result is urban sprawl and reduced density. Dominant transport modes are, therefore, the determinants of urban structures. The increase in distance covered due to increased speed of travel and urban sprawl leads to an increase in energy consumption. END_OF_DOCUMENT_TOKEN_TO_BE_REPLACED

Environment Impact Assessment (EIA) has emerged as the most famous tool for environment protection in recent times as it focuses on the amalgamation of the environmental management into the decision making process for sustainable development. END_OF_DOCUMENT_TOKEN_TO_BE_REPLACED