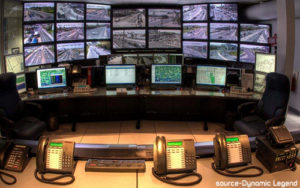 The city police of Pune recently inaugurated the newly constructed building of the Central Traffic Management Centre in the premises of the Pune police commissionerate.

The ultra-modern traffic management centre has been constructed at a cost of Rs 50 lakh which has a giant screen on a wall with multiple monitoring systems. Live feed of 1,230 CCTV cameras located on different roads in Pune and Pimpri-Chinchwad will be constantly monitored by the policemen.

The centre also has a separate wireless unit and a phone room. The police personnel watching the live feeds will alert field officers to divert traffic to other roads to avert traffic jams or to provide timely help to accident victims. The footage will also be used to send e-challans to traffic rule violators.