May 1, 2012 in Features, International, National 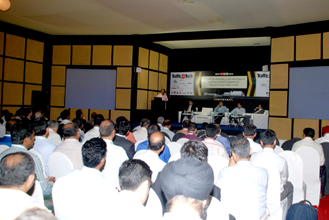 “Intelligent Transportation Systems (ITS) applications are supposed to reduce congestion and help in inter-modal integration across concerned agencies & institutions. But despite all the technology available, the traffic industry is not experiencing the advantages of ITS. The problem is there are no common guidelines for ITS in the country and no national ITS architecture. These need to be implemented,” said Sanjeev Kumar Lohia, OSD (Urban Transport) & Ex-Officio Joint Secretary, Ministry of Urban Development, Government of India. He was speaking at a seminar on “The need for, challenges in and advantages of achieving Unified ITS Solutions for Highway & Urban Traffic in India.” The seminar was organised on the final day of TrafficInfraTech Expo 2012 which was held from May 17-19 at Bombay Exhibition Centre, NSIC, Goregaon (Mumbai). Lohia, who chaired the seminar, outlined the various applications of ITS in traffic industry such as Automatic Traffic Management System, Area Traffic Control Systems, Vehicle-to-Vehicle communications and Vehicle-to-infrastructure systems.

Vivek Phansalkar observed that the introduction of high-end technologies such as ITS will not make much difference to the transportation problems facing the country unless the commuters and motorists, the end-users of the technology, practically experience a difference in their travel. “Mumbai has Area Traffic Control (ATC) system in place at 250 traffic intersections out a total of 1250 intersections. One of the problems the Mumbai police has been facing in the implementation of the ATC system is that there is a very high volume of vehicles in the city. Due to this, the vehicle counter in the ATC system hits its upper limit very quickly and is not able to respond dynamically to changes in the traffic, thus defeating its very purpose,” he said. “Also, a lot of systemic changes need to made in the governance before the benefits of ITS can be experienced. An example of this is that currently in India even if the police were to catch a large number of traffic violators, we do not have a centralised database to get personal information of the violators. Even if we were to develop a technology for generating traffic tickets electronically instead of manual tickets, a technology lacking at present, there was no way of enforcing the tickets at present”.

Ravi Kumar was of the opinion that for ITS to succeed in India, two Cs were relevant – Count and Culture. “It is important to reduce the first C – Count of vehicles, because it is very difficult for an ITS application such as Area Traffic Control System to work with very high volume traffic. The other C – Culture needs to be changed, for example, Indian motorists tend to jump signals when no policemen are around. Another problem is the lack of uniform standards due to which interoperability is not possible. In some states like Kerala the drivers of two-wheelers are required to wear helmets and not the pillion riders, whereas in other states, both have to wear helmets. Similarly High Security Registration Plates, a mandatory requirement for unified ITS solutions is not possible because of the huge variation in number plates across the country – fancy fonts and varying colours to name just a few,” he said. Ravi Kumar added, “Long delays in implementing ITS projects also cause hurdles because the studies done for the project become outdated and the solutions do not work properly. Lack of indigenous ITS solution providers also is another problem because the solutions have to be customised for typical Indian traffic conditions of extreme heterogeneity and lack of lane discipline”. C-DAC has developed two such solutions which have been implemented in Pune and Kolkata but much more needs to be done.

CSRK Prasad observed that there was no national ITS standard in India such as ITS USA and ITS Europe. “ITS development in the country has been too slow and fragmented. This is due to a variety of factors, some of them being the infrastructural and cost limitations. In India, both ITS solutions and a proper transport infrastructure are being put in place, whereas in other countries a sound transport infrastructure is already in place when they implemented ITS. Thus there is a need for a national ITS policy and a uniform architecture at the national, state and regional level”. Prasad added, “All stakeholders such as Ministry of Road Transport and Highways, Ministry of Urban Development, Department of Information Technology and various municipal authorities have to be taken on board while formulating a national ITS policy”.

Rish Malhotra traced the evolution of ITS based solutions in the fields of toll collection and highway traffic management solutions and outlined the operations of International Road Dynamics in India and across the world. Responding to a question whether there were any ITS solutions to the problems of pavement distress and the problems it caused, Malhotra said that there pavement management sensors which communicated with roadside units and alerted the infrastructure maintenance agency that there was a potential problem and needed to be tackled. Vishwanath, while outlining the various ITS enabled application in the traffic industry, emphasised the fact that human factor was important for the solutions to work practically.

Products launched on 3rd day of the Expo

Paragon by FAAC India Pvt Ltd is an Integrated Parking Management System with third party applications. It contains all the requirements for professional and innovative management of a modern car park. It is equipped to handle a ground only or multi–storey car park, allowing access to the area and ensuring control of vehicle flows through both manual and automatic mode of payment.

TruCAM Video Laser by Turbo Consultancy Services Pvt Ltd is the next generation all in one laser based video camera for traffic enforcement evidence. It collects and stores a complete chain of video evidence for both speeding and tailgating, along with high resolution image that identifies vehicle make, model and license plate number.