Various permissions are required from different government bodies, none of which coordinate with each other. This delays road completion. For example, we recently executed a project in which a certain stretch of the road required clearance from the forest department. For two years, we did not get permission. By the time it finally came through and we could start work on that stretch, we had already finished constructing the major portion of the road.

A single-window clearance system is the need of the hour. A recent decision to shift utilities such as electricity cables, water pipes, and sewage lines on only one instead of both sides of the road has done much to speed up the process of road construction. 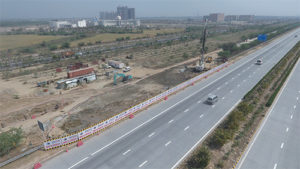 Many parcels of land that are part of the road route are found to be encroached. Local units of political parties show up on the scene and prevent these encroachments from being cleared. Since different parties are dominant at the national, state and local level, this tug-of-war between parties leaves the contractor stranded.

Sometimes, some members of a party will refuse to pay toll, and incite those using the road to do the same. Not only does this affect operations and maintenance of the road, it also causes huge losses to the government. Unmanned toll plazas are a futuristic but effective solution to ensure uniform collection of toll.

Despite many hindrances, Ashoka Buildcon has set records for project completion. We had 30 months to construct the Rupnarayan bridge near Kharagpur; we finished it in 10 months. We reduced a two-year execution timeline to just 38 days. A flyover on Delhi’s Outer Ring Road was completed in 100 days, with astonishing rapidity, and no compromise on quality and safety.

In the last few years, the rate of growth of the highway sector has slowed down. If we addresse the above problems and implement solutions for the same, we will surely be able to connect India by building many more kilometres of highways every day.

The need to find a win- win approach

Complimenting Ashoka Buildcon for being one of the best performing entities in the Highway construction sector, Yudhvir Singh Malik, Secretary, MoRTH agreed that land acquisition and utility shifting remain the major challenges. “As an institutional arrangement, now we are considering a system wherein the Contractors are allowed to commence work on preconstruction activities like tree-felling and utility shifting during the period intervening between the issue of Letter of Award and the declaration of Appointed Date. Particularly, if it is a project awarded under the Hybrid Annuity Mode, the Contractor/ Concessionaire gets about six months time for achieving the financial closure and this intervening period can be gainfully utilised for completion of these pre-construction activities. This intervening period does not count towards the scheduled completion period of the project”.

Mr Malik continued and said, “Secondly, there is no denying the fact that on our part, we have been found wanting in terms of provision of 100% project land. While the project execution agencies occasionally resort to pre-mature declaration of appointed dates driven under the pressure of targets, the Contractors/ Concessionaires also happily agree to accept the Appointed Dates by giving waivers to the fulfillment of pre-conditions. When I first came to NHAI, I had withheld more than 25 cases of declaration of appointed dates because of these issues but surprisingly the Construction agencies were more keen to accept pre-mature declaration of appointed dtaes. I was given to understand that they were eagre to do so as they wanted to get the mobilisation advance.

“It is my personal view that it would be a good idea to have one year as an Award holiday, which should be utilised to complete all pre-project activities like Land Acquisition, approval of Utility shifting estimates and tree-felling etc. so that the project execution period is optimised. It is an unhappy situation that that the Construction agencies are as much willing to give the waivers in fulfillment of the preconditions as the Ministry is found wanting. I would, therefore, suggest that the industry must take a stand that if we are not meeting the pre-conditions for declaration of an appointed date, it should not accept the appointed date as the ineherent inefficiencies hit both sides adversely.

“Be it Hybrid Annuity or EPC mode, our concern is not just the availability of 80 or 90% land, but it is also the availability of contiguous land. The contiguity of the work front is as critical as availability of 90% land. If 90% of the land is available with 50 gaps in it, the project would face problems in smooth execution. The response of the Industry to address such situations varies widely. While one entity may choose to take the route of arbitral claims on account of delays, a performing entity, that targets the bonus, adopts an innovative approach of taking the missing links from the land owners on lease. Thus, it depends on what kind of approach a particular construction entity is adopting. While we are trying to tighten the norms on our side with regard to availability of land before we invite bids or before we give the appointed dates, the construction industry should start insisting on the completion of the pre-conditions and refuse to give the waivers on that account. As a matter of fact, the joint statement signed between the parties before declaration of the Appointed Date is going to be made a part of the Contract Agreement so that neither party back-tracks from the same at a later stage.