Chennai Traffic to be managed under Smart City 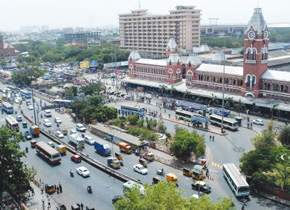 With Chennai Corporation getting a nod to implement Red Light Violation Detection (RVLD) system by installing ANPR cameras under Smart City, catching of red-light violators and managing traffic at busy junctions of the city are set to get automated.

The ANPR cameras will be powered by Optical Character Recognition technology to read the number plates of violating vehicles. The system will automatically generate challan for payment of a fine which will be sent to the violator. An initial study for preparing the detailed project report will be done across 385 city junctions while the execution will begin at 159 busiest junctions.

The traffic system at these junctions will be automated to be monitored and controlled from a central point. Chennai Traffic Information Centre (CTIC) will be stationed at the police headquarters from where all the traffic signals will be monitored. Instead of manually changing signals or holding green signal for longer periods, this will help regulate alternate routes for ambulances, or for setting up VVIP traffic arrangements.

The city will also get a strengthened public transport system with digital boards at key locations near busy bus depots that state the time of arrival and departure of buses on the route. Besides having GPS, buses will be integrated with the information system at depots to announce the next bus stop. Key locations in the city will sport Variable Messaging Signs for important messages and departure of buses from nearest depots.

The information system will be implemented by coordinating bodies like MTC, corporation and the city police. Besides, a portion of the funds will be used to improve pedestrian crossing and improvement work at the junctions.

Previous: Delhi to redesign streets to make them pedestrian friendly
Next: Guidelines for National permit vehicles