The important venues earmarked for the Commonwealth Games (October 3-14) are scattered over a huge area in the National Capital. From Indira Gandhi International Airport in the south-west to the Yamuna Sports Complex which is 40kms away in the east, and from Chatrasal Stadium in the north to Dr. Karni Singh Shooting Range 25kms down south, these venues are spread over the Games Village, 11 competition complexes (many of which also have training venues) and six stand-alone training complexes.

Elaborate transport plans have been made to chalk out the precise movements of the athletes and their family members right from their arrival at the airport down to their departure to the Games Village and also more than a dozen first class hotels. Similarly, while chalking out the transport plans, the authorities have also meticulously considered the movements from the Games Village to various competition and training venues right through the period of the games. 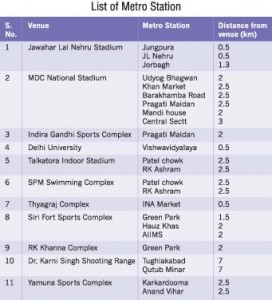 The transport strategy specifies not only the routes to be taken, but also the precise points at which disembarkation, parking of vehicles and re-embarkation will take place near the competition and training venues. While there would be dedicated buses to cater to the requirements of athletes, media and other professionals, cars would be specifically reserved for senior Commonwealth Games Federation functionaries and senior members of the Games fraternity from different countries. Entry gates for the vehicles of athletes, field officials, media and spectators have also been clearly earmarked to ensure that there is no conflict in movement.

In order to facilitate transportation of members of the public desiring to visit the venues, a large number of DTC buses will operate from 26 focal points within the city that will converge on five distribution hubs. A few more focal points have been marked outside the city in the neighbouring NCR region. These will be augmented by Delhi Metro which would run larger rakes with as many as six coaches per train, with a greater frequency of one every three minutes on key routes. According to the transport cell of CWG, when phase-II of the Delhi Metro will be completed by September, the coverage would be as high as 190kms. Two of the key routes being completed would be those that link Indira Gandhi International Airport with New Delhi Railway Station, and Central Secretariat with Badarpur, the latter link catering to underground stations in the vicinity of the J N Complex which is the most important venue of all the games related venues. 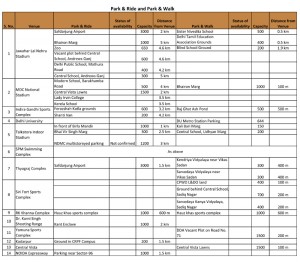 Both for the bus and metro borne passengers, the effort would be to bring them to points close to various stadia and from there, provide shuttle bus services. Similarly, for car borne spectators, convenient parking places would be provided some distance away from the venues. Provision would be made to facilitate their movement through a park and ride shuttle service. Prominent in this category is the huge car parking facility being organised at Safdarjung Airport which would be linked with important stadia like J N Complex via a shuttle. A similar parking facility at the DDA Complex at Hauz Khas would link Tennis Complex through a shuttle service.

The movement of Games related vehicles would be on dedicated and reserved lanes bearing the Commonwealth Games logo and other indicative signages which would be put in place shortly.

Various traffic calming measures will be put in place. The day of the closing ceremony (October 14) will be declared as a closed day under the Negotiable Instruments Act, the opening day being a Sunday. Traffic advisories would be issued at an appropriate time on the routes that private vehicles may follow.

The authorities in charge of the Games opine that the general perception that millions of people would clog Delhi’s roads during the Games is misplaced. The total seating space in all the 11 competition venues taken together does not exceed 1,50,000, they aver adding that all the 11 venues cannot be jam packed at all times during the 12-day-event. Also, a very large number of people in Delhi, like those in the rest of India, would watch the events on television. There would, no doubt, be a large number of tourists in the city as is the case in the month of October every year but, the authorities counter, many of these would use Delhi as a transit point in the course of their onward journeys to Rajasthan, Agra, J&K and Uttarakhand. 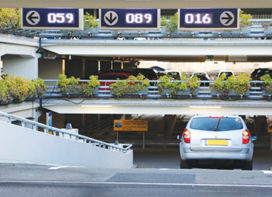