An Italian company, SISTeMA, is introducing OPTIMA ? a traffic predictive modelling system in India and hopes to make a difference in the way our traffic is managed 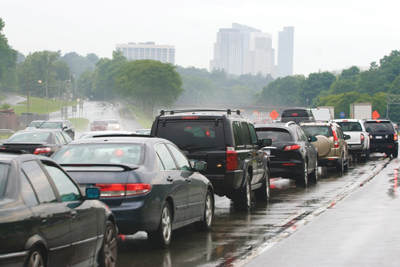 In an effort to manage traffic better, accurate forecasts on traffic are becoming the order of the day the world over. SISTeMA, a PTV Group Company which is an academic spin-off of Italy?s University of Rome ?La Sapienza?, has come up with OPTIMA ? a traffic Predictive Modeling System that the company is in the process of introducing in India. Optima is aimed at providing real-time reliable traffic forecasts in a completely automated way, combining advanced traffic modeling methods with FCD data (vehicle trajectories) continuously collected over the road network via simple GPS/UMTS technologies.

The system is able to capture and foresee the effects over road travel times of either planned event (e.g. road works) or unforeseen events (e.g. accidents), and is thus conceived to provide a base for info-mobility and transport optimisation services over congested transport networks where the within-day variability of traffic congestion is not negligible.

Optima presents technology solutions especially fitted for any country where it is not easy to gain access to standard, reliable and extensive traffic measurements. It is based over an advanced methodology constituted by models and algorithms for the dynamic simulation of transport systems, allowing for the estimation of varying travel times, traffic flows and vehicle queues. The unique point here is that it uses a limited amount, compared with existing methodologies, of observed traffic state information.

In particular, Optima is able to:

– infer the traffic flow state (speeds, vehicular densities, and presence of queue) associated with network elements from observations on the state of traffic carried on the network itself, especially in the form of vehicle trajectories (FCD data);

– determine, based on this state variable over time, the estimated travel times on the network between any pair of points depending on the departure time;

– operate in real-time, that is continuously updating the estimates on the state of the network and the travel times on the basis of data collected continuously over time.

– it provides travel times that are not constant over time (but vary during the day depending on the traffic congestion), and are definitively more accurate and reliable than those actually provided by other technologies;

– based on the above information and on the time dependent characteristic of the road network (i.e. limited access zones, etc.), it is able to perform real-time calculation of optimal path dependent on the departure time;

– both the offline and the real-time estimation and prediction of travel time do not require a massive or extensive collection of traffic data ? in particular about one probe vehicle for every km of monitored road network. For e.g., the principal network of the Rome municipality, Italy, consisting of about 1000km of road network and serving about three million citizens, requires about 1000 probe vehicles for travel time estimation and forecast. The system is able to extend both ? in time and in space ? those field measures by means of a sophisticated methodology, integrating them with historical mobility data;

– traffic information is collected, transmitted and elaborated by Optima automatically, without the need of human operators. This results in a dramatic shortage of the time needed to make traffic information available for mobility decisions (down to a few minutes);

The system is scalable and replicable since it is based over standard commercial or public transportation, mobility and socio-economic data. Moreover, it doesn?t rely on external data sources such as municipalities, police or transport network operators (although it can use their data, if available), since information may come from the same vehicle using the system ? acting as automatic and moving probes.

Optima is based an advanced methodology constituted by models and algorithms for the dynamic simulation of transport systems, allowing for the estimation of varying travel times, traffic flows and vehicle queues in limited amount, compared with existing methodologies of observed traffic state information

There are two approaches to produce traffic forecasts. While the first is typically based on the mere interpolation of field measurements by applying statistical interference, data mining and / or artificial intelligence methods to match the current time-series with historical patterns, the second is based on the physical interpretation of the traffic phenomena by modelling explicitly the integration between travel demand and road networks through assignment models. A new generation of methodologies is now based on Dynamic Traffic Assignment (DTA) models which are able to reproduce explicitly the formation, propagation and dispersion of vehicle queues on the road network during the day, including the spillback phenomenon.

The proposed approach for Optima relies on an advanced methodology constituted by models and algorithms for the dynamic simulation of transport systems, allowing for the off-line and real-time estimation and forecast of time varying travel times, traffic flows and vehicle queues generated by predicted and unpredicted mobility and / or events occurring on the monitored transport network, using both historical data and continuously observed traffic state information.

The proposed logical architecture presents an off-line part and an online part. The off?line part is basically devoted to the construction, calibration and update of the transport model, and to provide, by means of a dynamic assignment model, base estimations and forecasts of traffic behaviour and travel time conditions for typical non-disrupted days and / or for possible incident patterns.

Once the model and the base traffic conditions are available, the online part will use the latter combining them with the measures coming continuously from the field into a real-time traffic model that will basically adjust the traffic estimations and forecast with the measured traffic conditions of that particular day. The online part is completely automatic and runs ?continuously? ? that is, a new traffic estimation and forecast is produced every few minutes.

Previous: Fighting for the Future of America?s Roadway Safety and Mobility
Next: Better Origin Destination Surveys