Widening Highway on the Hills 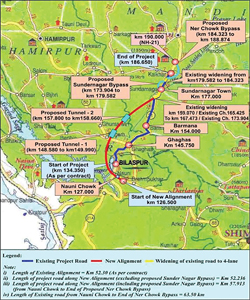 The Project Road is an important link between the National Capital and the tourist destination of Manali in Himachal Pradesh. Also the NH-21 is a major link to Leh in Ladakh. With the opening
of Rohtang pass tunnel in future, this will be an all weather strategically important link to Ladakh.

The Project Road starts from the Kiratpur in Punjab town and connects to Ner Chowk in Himachal Pradesh. The existing road is a 2-lane carriageway with earthen shoulder and runs through a combination of plain/rolling and predominantly through the mountainous terrain. The
surface condition of the project road is generally good. However, there are certain sections of the road where there is severe deterioration of the existing pavement and need to be rehabilitated.

The project starts from km 73+200 and ends at km 188.874 of NH-21. The existing length of the Highway is 115.674 km. But due to realignment and construction of tunnels, the Project length has reduced to only 79km thus total saving of about 36 km. The project has 2 Spurs (means
off road from NH) one for Bilaspur having a length of 3km and other for ACC Cement of 1.80km length. This will give an advantage of saving of 36 km length and also improved gradients and curves so as to achieve a vehicle speed of 80 kmph. This will not only save the travel time but also will save the vehicle operating cost.

Land Acquisition:When KNCEL took over the project, land acquisition was under process and concession was signed in the year 2012. Only in 2013, 80 percent lands’ 3D was published. Even after demarcation of land, approaching certain locations was just impossible due to dense forest and deep valley. KNCEL got involved in the complete demarcation process and land survey to expedite the process.

Forest tree demarcation has major influence on smoother execution of projects in time.

The challenge in this project is to complete in time having only 6 months of working season. The activities has to be taken on all fronts simultaneously and also the material availability has to be ensured for smooth and efficient use of non working season.

Utility shifting: Since ours is a first project of four laning by NHAI in the state of Himachal Pradesh, we faced procedural difficulties in
getting estimates prepared from the concerned departments for further approval from NHAI. This was a herculean task as departments had no exposure to such works, therefore, consumed more than a year to finalize. Still certain utility estimates are pending to be received which are hampering the progress of work as on date.

Again, obtaining various permissions for statutory compliance took six months to one year. Projects which have a time period of three years suffer on account of these permissions and resultant cost overruns.

One main challenge has been the proposed configuration. Majority of the length has to be in 4-lane with divided carriageway with 1.5 m paved shoulder and 1.5 m earthen shoulder on either side.

Another challenge is the flexible type of pavement along the Highway and rigid pavement at toll plazas and tunnel section.

Being Hilly terrain the alignment has been designed keeping in view of available ROW and feasibility to design the curve for best fit. Minimum radius adopted is 70m for the Design speed of 40km/hr and Max Radius is 300m for Design speed of 60km/hr. Gradient adopted is up to 7% i.e., limiting/ exceptional gradient . 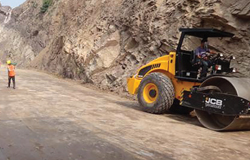 The highway work requires extensive slope preparation work in cutting and filling areas. Based on Geotechnical investigation and recommendation by Geology specialist, the slope protection for the cutting area was designed.

As we know that Slope stabilization system is a mitigation system consisting of a mesh of high-tensile steel wire. It is used in combination with soil and/ or rock nails to stabilize steep slopes in unconsolidated material and rock liable to slip and break out.

Due to restrictions of construction within Right of Way, the necessity of slope protection works was felt as height of embankment at certain locations where up to height of 25 to 30 metres. Therefore, in such condition, with limited space, a vertical Paramesh structure can be constructed with Terramesh (TMS) units as facia. Depending upon the space availability, Paramesh structure with slope of 45 degree to 70 degree can be constructed using Green Terramesh (GTM) units as facia. It is required to provide a solution to prevent erosion and to facilitate grass growth along the slopes of a road embankment.

Paralink is a high strength geo-grid from high tenacity polyester yarns. The bundle of polyester yarns is co-extruded with polyethylene to form the individual polymeric strip. A uniaxial arrangement of these strip connected to each other at intermittent intervals by polyethylene strip forms the geometry of the geo-grid. 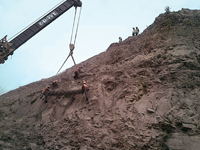 In the stretch, a total of 41 nos. of Major and Minor Bridges (23 major bridges, 18 minor bridges and 01 grade separator) will be constructed. There are bridges with variable span lengths ranging from maximum of 632 metres to smallest of 13 metres. Also looking into the unapproachable access and pier heights of around 30 metres in certain locations, the preparation for launching of girders at such height has already commenced from early phase of the construction period.

Leaving behind 13.015kms of plain terrain, remaining entire stretch is in Himalayan Range (Earthquake Zone V), where geographical conditions and topography varies from one structure to another. Therefore, to construct earthquake resistant structures and to provide safe passage of vehicles during any catastrophic situations prevalent in such hilly terrains, geological or geotechnical investigations were carried out for all the bridges and on the basis of observations, safe and suitable design has been adopted for all the structures including the bridges, cross drainage structures and slope protection works. Certain bridge locations were under fault zones and therefore design at such locations in seismic zone V required special seismic investigations which were conducted by IIT Roorkee.

As per the viable condition, the well, pile or raft foundation was adopted with sub-structure and super-structure arrangement of all types as solid slab, RCC Girder, PSC Girder, Box Girder, Steel Composite Girder, Steel Truss and Balanced Cantilever Bridge looking into the constraints for execution of work in period of two and a half years.

From construction point of view, most challenging task is to undergo piling and well foundations activities in flowing water of Gobind Sagar Lake. What adds to the adversity to the challenge is the clayey silt for about eight meters beneath ground surface making it unfavourable condition to work upon. Therefore, to overcome this, there are piles of even 1800mm diameter for a length of around 40m
in such locations. Moreover, in certain areas at the end location of the project, floods occurs mostly during monsoon period.

Adding to the challenge is the construction limitations such as unapproachable access to the bridge locations. Only six months of safe working period is available during entire construction year.

Even during construction, limited carriage way of village roads to safely cater earthmoving equipment from one location to another and timely pouring of concrete from plant work site without compromising on quality and safety is itself a demanding and challenging job.

This project is composed of five tunnels with full length 4,927m and one escape tunnel with length of 1,802m. Out of five tunnels, underground excavation for four tunnels is in progress. The bridges on land are in advance stages of construction but the bridges on Gobind Sagar Reservoir is at founding level.

Tunnel 1 will be 1,836m in length and in order to comply with the International recommendations for emergency situations, an escape tunnel is planned, to be developed parallel to the main tunnel gallery and connecting to it by several linking galleries.

The escape tunnel will allow the evacuation of pedestrians and the circulation of emergency vehicles in case of emergency. In case of break down or stoppage of vehicles inside the tunnel, there will be an enlargement of the tunnel section for the implementation of two lay-bys. Given the tunnel length, it is also to install a cross ventilation system with intermediate ceiling and smoke exhaust through a ventilation duct established next to the dome of the tunnel. There will also be electrical (power supply, distribution system, lighting and earthing system) and fire fighting systems.

For the slopes stabilization of portals, application of a systematic rock-bolt mesh with variable length have been used. Slopes and benches were protected at the surface with shotcrete and wire mesh.

Tunnel 2 will be 494m in length and it is constituted by a single gallery for bidirectional circulation, which in its cross section bears the clearance profile of 8.0m width and 5.5m height. Each traffic lane has 3.5m width with an edge strip width of 0.5m and a sidewalk of 0.75m wide (minimum) on each side of the tunnel.

Tunnel 3 will be 554m long. It is a bidirectional circulation tunnel (two laning) and the clearance profile was set with 8.0m width and 5.5m height. Each traffic lane has 3.5m width an edge strip width of 0.5m and a sidewalk of 0.75m wide (minimum) on each side of the tunnel. Given the tunnel length, It is planned to install a longitudinal ventilation system.

Tunnel 4 will be 1,299 long and it is constituted by a single gallery for bidirectional circulation, which in its section bears the clearance profile of 8.0m width and 5.5m height. Each traffic lane has 3.5m width. The definition of the tunnel cross section has taken into consideration additional areas needed for sidewalks and for ventilation.

Tunnel 5 will have 744m of length and similar specifications like tunnel 4.

Main problems during the construction:

The construction of a tunnel is always a complex and delicate matter in which many factors are involved. In the case of these five, one of the main difficulties is the location of some portals. Due to the imposed alignment, some portals are located under nalas, a location not favourable for the tunnel construction. The construction of these tunnels considers the deviation of the respective nalas, but also the rock mass in these areas is often weaker and the overburden is reduced, so that construction in these areas shall be done carefully.\

On the other hand, these five tunnels are located in a rock mass which is characterized as a succession of layers of lower and higher hardness of siltstones, clay stones and sandstones of metric to decametric thickness. The variation in the degree of weathering, and hardness hinders a uniform and continuous execution, since it is necessary to adapt the execution of the tunnels to numerous changes in the rock mass conditions. The presence of soil layers very thick, sometimes slipped, with enormous boulders also hinders the implementation of the portals and tunnels, because they contain huge blocks that cannot be excavated and supported easily.