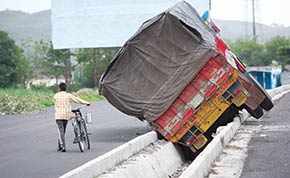 For the last four to five years, Trafficinfratech has been bringing to the forefront the importance of installing crash barriers along the highways/express ways. Despite the chain of accidents on the 540km long Mumbai-Goa Highway and 95km long Mumbai-Pune Expressway, we have not been able to assure safety to their users. Now joining the dangerous stretches is Eastern Freeway, a 17km signal-free stretch with no speed limit and inconsistent anti-crash barriers.

On October 24 this year, two youngsters survived a major crash on the Eastern Freeway in Mumbai, when their Honda City rammed into a barrier which sliced into the car’s bonnet and windshield. While the car was left in a mangled state, the motorists survived with injuries. Early November again, an overloaded and speeding Santro with nine travellers hit the same Freeway’s side wall killing six.

We are back to square one. The ability to attain high speeds on the winding road, along with the exposed edges of barriers, makes the Freeway one of the most accident-prone roads.

We agree prevention is better than cure. Taking action against the offenders or issuing challans comes second. Experts say the primary causes are over-speeding and lack of quality safety restraint systems. Then there are other issues like the missing medians / dividers, tyre bursts, overloading of vehicles, blind turns, uneven surface, overtaking at night, not maintaining front and rear lights/ reflectors, unwanted use of high beam, lack of CCTV cameras in most places and fatigued drivers.

Crash Barriers for mitigating the problem

There are a few man-made engineering problems that are actually very dangerous. Like the black and yellow curb stones embedded into the concrete and guardrails with tapered ends. JP Research has identified over 200 spots on Mumbai-Pune Expressways where engineering fixes like barriers and signages could save lives.

In a recent BBC report, Piyush Tewari, CEO of the SaveLIFE Foundation, says that road crash deaths will increase at the rate of one death for every 2km new road that is constructed. “That’s the average death rate on Indian highways annually. So, if we do not fix any of this, if we are constructing 100,000km of highways, 50,000 deaths is what the average maths tells us, will be added to the total.”

Safety barriers offer huge opportunities to improve accident statistics worldwide. There is a wide array of products in the market to suit all types of installations and with a diverse range of solutions for each application. Highway authorities have been installing barriers for many years now and the technology continues to improve. However, an analysis of accident statistics shows that barriers offer further potential.

The focus in our country has to be on Safe Road Environments and accepting the fact that more than 80% accidents worldwide happen due to human errors. But the road environment has to be such that it is able to control the accident once the error occurs. This push has to come from the government. Cost effective solutions for crash barriers are available worldwide. What is needed is implementation and adoption!

Barrier providers state that India does not have well-drafted norms on crash testing or performance of barriers and only drawings on paper are followed for the conventional barriers. The crash barrier is basically supposed to prevent the vehicle from vaulting over and successfully restrain and redirect the vehcle back to the carriage way. In June, Road Transport and Highways Minister Nitin Gadkari had called a meeting of over 20 crash barrier makers and asked officials to finalise specifications of different crash barriers for a tender to be floated for it. Barriers are also needed to prevent accidents caused while trespassing. The Minister had announced at the launch of a coffee table book ‘The Golden Quadrilateral’ that national highways across the country would be made access-controlled by using galvanised sheets.

Previous: Designing Mobility in Smart City
Next: How transport data can fuel the future of mobility