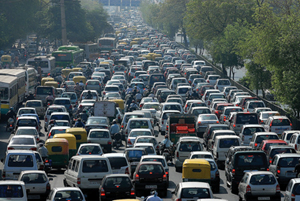 India is a dieselised economy with an annual diesel consumption of around 60 million tonnes out of a total consumption of 140 million tonnes of petroleum products. Diesel engines, important power systems for on-road and off-road vehicles, have historically been more versatile and cheap to run than gasoline engines or engines run on other sources of power. Most heavy-duty trucks and buses are powered by diesel engines due to their long record of reliability & durability, high fuel-efficiency, high torque output, ease in repairing and inexpensiveness in operating. It is not uncommon for a diesel engine to last 15-20 years and achieve a one million-mile life. From the standpoint of greenhouse gas emissions, diesel engines can compete with other advanced technologies like hybrid electric vehicles due to diesel’s inherent fuel economy as against the conventional spark-ignited, gasoline engines. Diesel-powered vehicles have demonstrated an advantage of 30-40% fuel economy over their gasoline counterparts. This translates to about a 20% reduction in CO2 emissions.

But while they have many advantages, diesel engines also have the disadvantage of emitting significant amounts of particulate matter (PM) and oxides of nitrogen (NOx) and, to a lesser extent, hydrocarbon (HC), carbon monoxide (CO2) and toxic air pollutants.

The pollution problem in the cities arising out of the increase in personal transport outpaces any good measure and road network development. The following data gives a glimpse of such skewed growth. Against 1.9 million in 1990 in Delhi, the vehicular population rose to nearly 12 million (Table 1) in the year 2009-10 (i.e., an increase of nearly 631%). During the same period, Delhi’s population increased by only 92% (from 9.5 million to 18 million) and road-length by merely 44% (from 22,000km to 32,000km). The situation is similar across a number of cities in India and the developing world. This indicates the exigency of controlling vehicular pollution.

Despite health and environmental concerns, the diesel engine remains a popular means of powering trucks, buses, and other heavy equipment for the reasons stated above. In Europe, more than 50% of the new cars sold each year are powered by diesel engines. This is, in part, due to the superior fuel economy of the diesel which delivers in excess of 30% higher miles per gallon than its gasoline counterpart. Engine manufacturers have made significant advances in the performance characteristics of today’s diesel power plants. Unlike the diesel engines of just 10-15 years ago which were considered noisy and sluggish, modern diesel engines deliver excellent low-end torque for superior acceleration. This, combined with advanced transmissions, eliminates the response lag of older diesel engines.

Diesel Exhaust (DE) is a complex mixture of hundreds of constituents in either gaseous or particulate form. Gaseous components of DE include carbon dioxide, oxygen, nitrogen, water vapour, carbon monoxide, nitrogen compounds, sulphur compounds and numerous low-molecular-weight hydrocarbons. As diesel engines breathe only air, blow by gases from the crankcase (consisting primarily of air and HC) are rather low. Due to its low volatility, evaporative emissions from the fuel tank can also be ignored. The low concentration of CO and un-burnt HC in the diesel exhaust are compensated by high concentration of NOx.

The main concern of the diesel exhaust on the health is the effects of PM2.5 including ultrafine particles. This fraction of the diesel exhaust particles is considered highly respirable to man and when inhaled, will readily penetrate to, and deposit within, the alveolar regions of the lung. The current perception is that such particles in the environment, especially during episodes of high urban pollutant levels, are responsible for a number of health problems in a proportion of the general population.

There is increasing evidence that the aged in general may be more susceptible to the effects of ambient pollutants. A number of features of cardio-respiratory functions such as cardiac output reserve, lung volume, FEV1 and maximum oxygen uptake, decline with age. Other morphological changes such as loss of lung elasticity, enlargement of alveolar ducts and loss of alveolar septae also occur with age. All of these changes, while having little effect on gross deposition, may alter localised deposition patterns and clearance, thus leading to pollutant-linked respiratory disease. Over their lifespan, the aged will accumulate particles or induce lung damage.

The young may also be somewhat more susceptible to environmental particles, perhaps due to the increased total and alveolar deposition of the fine (0.2µm) to ultrafine fractions PM2.5 in young children. This could possibly be combined with the fact that during early childhood many of the in-built mechanisms to resist diseases are not fully developed and therefore, are potentially more susceptible to inhaled particles than in adults where these are fully developed. In children, fine particles are associated with upper and lower respiratory impacts as well as retardation of lung growth and crib death.

Nitrogen oxide (NO2) is broken down by sunlight to form nitrogen monoxide (NO). NO then re-reacts to form more NO2. Ozone and unstable oxygen compounds known as proxy-radicals can also be involved in this cycle. Nitrogen oxides are really at the centre of atmospheric chemistry. Most chemical compounds which are oxidised and removed from the air or are transformed into other chemical species come into touch directly or indirectly with NO or NO2. NOx (= NO + NO2) and other nitrogen oxides are important in almost all atmospheric reactions. Another form of nitrogen oxide, the very reactive nitrate radical (NO3), is formed in the dark and this controls the chemistry of the night time atmosphere. Nitrogen oxides react with water to form nitric acid (HNO3). Nitric acid is not only a major contributor to acid rain but is also the main way in which nitrogen oxides are removed from the air, either by dry deposition of the acid directly or by removal in rain. Nitric acid is also important in polar stratospheric cloud chemistry. Here it occurs as nitric acid tri-hydrate and this species plays a part in the formation of the ozone hole.