The worst thing about vehicular pollution is that it cannot be avoided as the emissions take place at the near-ground level where we breathe. Pollution from vehicles gets reflected in increased mortality and morbidity, and is revealed through symptoms like cough, headache, nausea, irritation of eyes, various bronchial problems and visibility. It is very difficult to assess the exposure to diesel emissions because they are highly complex mixtures and constitute only a small portion of a broader mix of air pollutants. For example, combustion of other materials such as fossil fuels and tobacco produce many of the same chemical components that are present in diesel emissions; furthermore, both natural and man-made sources of respirable particles are common. No single constituent of diesel exhaust serves as a unique marker of exposure; however, scientists can use the levels of fine particles or elemental carbon (both of which are much high in diesel emissions than in other combustion products) as surrogate indices of diesel exhaust particulate matter. 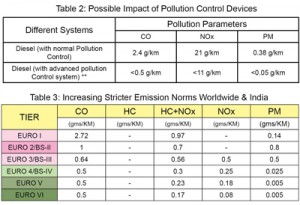 It is being scientifically tested and experimentally proved that significant reduction in the emission parameters may be achieved through the use of emission control devices. Therefore, it is a fact that the chemical and physical characteristics of diesel emissions will change as new technology and fuels are introduced.

The European Union (EU) emission limits for passenger cars and heavy-duty vehicles have continuously been lowered since 1993 with the Euro I to IV consecutive stages (1) and the Euro V to Euro VI stages (2) respectively. The same was also witnessed in India over the last decade (Table 3). 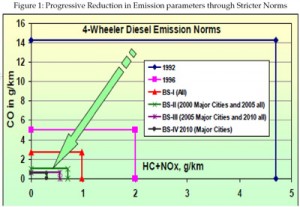 The journey of emission norms started in 2000 when the Government of India set its first limits for emissions nationwide through India 2000. Bharat Stage II (BS II) was implemented partly in National Capital Region (NCR) and three cities in 2001, and was later extended to 10 other major cities in April 2003. It was finally adopted on a national level in April 2005. The same methodology was again followed when Bharat Stage III (BS III) was launched in April 2005 in NCR and few other cities, and came in force nationwide only in April 2010. Now presently, BS IV is being implemented in NCR and 13 cities with effect from April 2010. (Fig 1)

At present, Bharat Stage III and IV emission standards legally allow diesel cars to emit several times more NOx and PM than petrol cars. But our emission standards are not fuel-neutral as they differentiate between petrol and diesel vehicles. The difference is evident in the emission factors developed by the Automotive Research Association of India for Bharat Stage III diesel cars that are sold across the country. These diesel cars emit 7.5 times more toxic particulate matter than comparable petrol cars. This means, one diesel car is equal to adding 7.5 petrol cars to the car fleet in terms of PM emissions and three petrol cars in terms of NOx emissions (Figure 2).

Total air toxins from a diesel car that are very harmful and carcinogenic are seven times higher than that from petrol cars. It is a myth that the diesel car technology that is available currently in India is clean and meets the public health objective. The auto industry claims that it is adopting common rail injection systems for diesel cars and therefore, it is clean. But this difference can only be achieved by post combustion abatement technology. The roadmap stipulated in The Auto Fuel Policy formulated by the Mashelkar Committee report is only up to 2010. There is an urgent need to lay down the roadmap beyond this and immediately go to stricter norms equivalent to Euro V /Euro VI.

Worldwide there is a trend to go for stricter emission standards and the clear trend towards the reduction in PM and NOx is a two-stage approach. The first stage requires PM controls such as diesel particulate filters. The second stage generally follows later with NOx controls.

The tightest NOx levels remain as set by the U.S. EPA, under their on-highway 2010 truck regulations, and similarly Euro VI and Japan have begun discussions on post-2016 emission standards for heavy-duty vehicles. Whatever the final outcome in Europe and Japan, the trend is clearly towards the technology-forcing regulations around the world requiring a systems approach that combines advanced combustion technology with additional exhaust controls for both PM and NOx. In India, Bureau of Energy Efficiency, Ministry of Power in association with various stakeholders, is in advanced level discussions for stricter norms of emission and simultaneously achieving the optimum energy efficiency for Indian vehicles.