The recent United Nations COP21 climate change summit in Paris highlighted the need to cut greenhouse gasses, such as CO2, by as much as 80% in many countries by 2020. But the problem is not just constrained to developed countries. Some cities in developing countries are regularly suffering air pollution levels that cause schools to close and days of work to be lost, says Akin Adamson, Middle East Director, TRL (Transport Research Laboratory).

The recent VW emissions scandal has highlighted the task facing motor manufacturers and legislators in reducing harmful emissions. With countries like the UK looking unlikely to meet EU limits for NO2 until at least 2030, there’s a mounting concern over the disparity between real world emissions and those measured during test cycles. Not only do such discrepancies call into question the validity and reliability of current test measures, but they indicate that current internal combustion engine (ICE) technologies will not cost-effectively deliver the required emission reductions in the real world over the longer term.

It’s apparent that meeting both air quality and emissions targets will not be possible without the substantial adoption of electrified powertrain vehicles. While the recent emissions scandal may act as a catalyst for electric vehicle (EV) adoption in developed countries, it alone won’t provide the incentive needed to truly electrify vehicle fleets across the world – where environmental concerns need to be better balanced with cost and convenience. However, could some form of on-road electrical charging provide the “enabling” solution the world has been waiting for?

It is well known that transport infrastructure and, in particular, the internal combustion engine are significant contributors to poor air quality, especially in urban environments. Electric vehicles offer an ideal solution for tackling current air quality problems. They provide zero tailpipe emissions, as well as grid-to-wheel CO2 emissions already below most internal combustion engine vehicles. However, current EVs are far more suited to short, urban journeys rather than inter-urban and rural use. Range and utilisation are constrained by battery limitations and charging times, so for longer journeys on strategic roads or outside of cities, EVs are often not yet practical.

Research to-date indicates radical battery technology breakthroughs are not anticipated in the near future. At the same time, incremental increases in EV battery capacity will place additional strain on plug-in charging infrastructure due to longer charging times and requirements for high power charging for highly utilised or large battery vehicles. So, in order to accelerate adoption, we need to find alternative answers to current limitations.

One possible solution is the development of a cost-effective and energy efficient way of providing power to vehicles on the urban and strategic road networks. This would not only reduce the need for large, expensive batteries on-board vehicles, but reduce the dependence on plug-in infrastructure, allowing utilisation to be optimised.

Wireless power transfer (sometimes called contactless charging) is a relatively well established technology for the static charging of vehicles when they are stationary over an in-road installed inductive loop (a “charging pad”).

A coil placed in the ground generates a magnetic field when a high frequency current is passed through it. A second coil, placed on the vehicle, when within range of the magnetic field, generates its own current. Therefore, electrical energy is transferred to the vehicle completely wirelessly. A similar concept is the one being used for wireless charging of smart phones and other consumer electronic devices.

This provides a simple mechanism for recharging a vehicle and removes the requirement for the driver or user to interact with any charging infrastructure, thereby increasing the practicality and user friendliness of the charging process. Charging pads can be conveniently installed at any location where a vehicle is likely to be stationary for any period of time, for example, in parking bays – without the need for complex or unsightly above ground charging infrastructure.

Another use case for WPT is to extend the range of public transport busses. Charging pads can be installed at bus stops so, when a bus is stationary (even for a few minutes), it can receive a charge that will allow it to travel much further than if it had to rely on stored battery power alone. Such systems are already in operation and the UK’s Transport Research Laboratory (TRL) is running trials across a number of cities in the UK (including London and Milton Keynes) to assess performance and suitability for wider use.

An evolution to WPT is the development of a cost-effective and energy efficient way of providing power to vehicles on the move. This not only reduces the need for large, expensive batteries on board vehicles, but further reduces the dependence on plug-in infrastructure, optimising utilisation. However, many people have questioned whether on-road charging is really viable.

To assess the viability of on-road charging, TRL recently completed a feasibility study for Highways England into dynamic wireless power transfer (DWPT). The study sought to understand whether DWPT technology can be used on England’s strategic roads to prepare for, and potentially encourage, greater take-up of electric vehicles.

For those not familiar with DWPT, it uses multiple inductive-loops along a stretch of roadway to provide power to vehicles when moving at motorway speeds. Results from tests around the world so far indicate that efficiencies of such DWPT systems should be comparable to plug-in charging. Findings from the feasibility study showed that existing DWPT systems have already proven to be able to deliver power of up to 140kW to moving vehicles, with higher levels possible.

In addition, one of the big advantages of DWPT over plug-in charging is efficiency. DWPT systems are designed to supply power to the electric motors in the vehicle directly, thus avoiding the inefficiencies of battery charging and discharging. It also enables vehicles with very small batteries to cover large distances of equipped highway in a mostly fully electric mode, for example hybrid HGVs.

Combined with the cost of the DWPT equipment and road installation, costs per km are substantial. However, when you consider that the technology would enable thousands of vehicles each day to drive in full EV mode along the equipped sections of the road, the benefits quickly become apparent.

Findings from the feasibility study showed that over a 20 year period, CO2 emissions could be reduced by 40% on per km basis, significantly helping the UK to meet the national targets for overall CO2 reduction by 2050. Furthermore, cumulative CO2 reduction (taking account of CO2 emissions from power generation) could add up to 34,686 tonnes, with a monetised value of almost £2M.

The findings also revealed that NOx and PM emissions could also be reduced by over 40% and 30% respectively on per km basis, with reductions in these pollutants on the highway most beneficial near populated or urban areas. Over the 20 year period considered in the study, NOx and PM emissions would be reduced by 55,886 tonnes and 572kg respectively, so the benefits should not be underestimated.

Wireless power transfer is already a reality across a number of sites in Europe for the static charging of vehicles; dynamic wireless power transfer takes this technology to the next level. It is not intended to replace the need for plug-in charging, but to provide an additional option for opportunistic charging or powering of the vehicle over long journeys that should make it possible to electrify much larger proportion of the vehicle fleet and to undertake a higher proportion of driving using, low-emission and low pollution electric traction.

The prospect of providing power to vehicles on the move offers exciting possibilities. However, to ensure a good understanding of performance, reliability and cost-benefit analysis, road electrification technologies will need to be tested extensively in a representative environment, combining on and off-road trials and pilots. If successful, DWPT, together with conventional plug-in charging in selected locations and urban areas, could provide a flexible, user friendly and fit-for-purpose charging ecosystem that might help achieve the radical step change in vehicle electrification needed to meet longer term air quality and greenhouse gas emission targets.

In addition, DWPT, is not the only solution for road electrification. For example, the use of cable catenary systems over highways to provide power to electric trucks via pantographs, as developed by Siemens for its eHighways system, is being trialled in Sweden and the US. Either option could be possible in developing markets depending on what outcomes are desired.

Regardless of the method chosen to achieve electrification, the concept of recharging vehicles on the move, combined with other initiatives, could play an important role in helping many regions to achieve their vision of becoming smart, connected and sustainable. 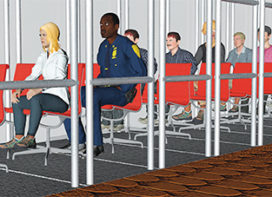