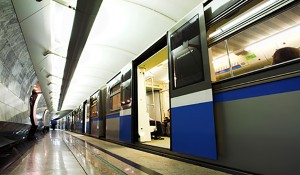 Energy consumption by trains is a growing concern for operators and infrastructure administrators. Energy cost is 30-50% of the Life cycle cost of rolling stock. Thus energy cost is large part of operating cost in railways. This becomes more significant in case of mass rapid transit system due to frequent stopping of the trains. Energy is consumed in trains in traction equipment and comfort equipment. Energy consumption in traction equipment covers propulsion drive, traction motors and the train control. While the comfort system includes energy consumption in lighting, heating/cooling, ventilation, doors, passenger information, passenger announcements and displays. The cost of the energy consumed over a life time of the Rolling Stock can be about 50% of the acquisition cost. Hence the cost of the energy consumed by the Rolling Stock cannot be neglected.

The energy consumption in trains is dependent on various factors including infrastructure parameters, environment, operational requirements and train design. The infrastructure, environmental parameters and operational requirement are not in control of a Rolling Stock manufacturer. The objective of a Rolling Stock manufacturer should be to provide energy efficient train design for particular infrastructure and operational requirements. Energy efficiency can be achieved by reducing train weight, reducing the energy losses in traction equipment, optimizing the consumption in auxiliaries and comfort system, maximizing use of regenerative braking etc. Thus good train design can significantly reduce energy consumption and hence operating cost. Unfortunately, energy cost is considered as operation and maintenance subject and due consideration is not given while procurement of new trains. The thought for energy efficient train design needs consideration since the beginning of tendering process. It should be kept as an important parameter from the stages of design to actual realisation.

The initial cost of acquisition is arguably the most important factor in selecting the bidder for supplying rolling stock. Energy efficient product and technology generally involve high initial cost. Every bidder aims to reduce its initial cost in order to bag the tender. Thus, no bidder would like to offer an energy efficient system unless mandated by contractual requirements. Further, there is always a tendency from the bidder to offer a product which “just” meets the contractual requirements without offering anything which is more advanced and is better. In order to get an energy efficient system, contract conditions should be spelt accordingly. There are two major ways to define this requirement while defining tender conditions for procuring rolling stock:

Another way is to add cost of electricity consumed over complete life of the rolling stock with the initial cost while doing the cost comparison for financial evaluation. This method forces bidders to compete and think of methods to improve energy efficiency.

1. Committing the Maximum Energy Consumption by all bidders based on same infrastructure and service parameters for fair comparison.

2. Measurement and Verification of the Committed Energy Consumption defined by the selected bidder.

Each step has got its challenges.

Energy efficient product and technology generally involve high initial cost. Every bidder aims to reduce its initial cost in order to bag the tender. Thus no bidder would like to offer an energy efficient system unless mandated by contractual requirements.

Previous: Green Transit Facilities and Benefits
Next: “We are not building a metro:We are redefining Hyderabad”