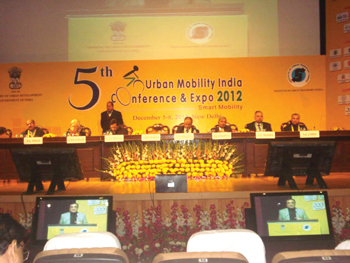 Ministry of Urban Development (MoUD), Government of India organised the fifth edition of Urban Mobility India (UMI) Conference and Expo in Delhi in December 2012. Spread over four days, UMI had speakers from various countries and the conference was addressed by two ministers: Kamalnath, Minister for Urban Development and Ajay Maken, Minister for Housing & Urban Poverty Alleviation (HUPA). While the first day of UMI saw papers on various projects presented by transport authorities from all over India, the next three days had experts discussing issues of giving momentum and rectifying the roadblocks on the path of urban mobility in India.

Kamalnath, in his address at the valedictory session, said that instead of waiting for Phase-III of Delhi Metro to be completed and then moving on to Phase-IV, the Centre would go ahead with work on some sections of the latter along with the work of Phase-III. He expressed his keen interest in encouraging monorail as ?it would serve as a good feeder to unviable projects by supplementing Metro in certain routes?.

Topics of discussion and roundtable included ?Energy and Climate Change Issues with Sustainable Transport Strategies?, ?BRT ? a Smart way to Move?, ?IPT in Indian Cities?, Complete Street Design and Access to Public Transport?, ?JNNURM Cities (SLBMs) ? Experience with benchmarking? and ?Congestion Pricing? among many others. The expo had about 38 exhibitors with the European Pavilion, the biggest pavilion, hosting many European companies whose representatives introduced their products / solutions / technologies at the conference. TrafficInfraTech too was an exhibitor at the Expo.

Previous: French Pavilion at Urban Mobility 2012
Next: BRIEF ENCOUNTERS, ITS will remove a lot of problems from the cities: R K Singh