Fighting for the Future of America?s Roadway Safety and Mobility

The Intelligent Transportation Society of America (ITS America), along with major automakers, safety advocates and transportation officials from across the country, is urging the Federal Communications Commission (FCC) to protect the 5.9 GHz band of spectrum set aside for connected vehicle technology ? which is expected to save thousands of lives each year ? from potentially harmful interference that could result from allowing unlicensed Wi-Fi-based devices to operate in the band. Scott F. Belcher, President an CEO, Intelligent Transportation Society of America elaborates. 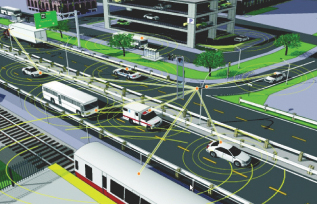 As we get closer to ITS America?s Annual Meeting that is being held in Nashville, Tenn. this April, it has become crucial for every person involved in building America?s transportation future to speak with one voice.

The United States enjoys economic stability and a quality of life that depends on a healthy infrastructure that can transport people and products safely and efficiently across great distances. Recognizing that the demand on the transportation network is only going to continue to grow, it is becoming increasingly clear that the future of this system depends on the use of information and communications technologies to maintain a safe, efficient and convenient method of travel.

Right now, we are on the verge of a breakthrough in roadway safety and mobility by way of a growing intelligent transportation systems industry. This evolution of our modern transportation network will be dramatically tied to the ability of vehicles to communicate in real-time with the infrastructure around them and with each other through Dedicated Short Range Communications (DSRC) in the 5.9 GHz spectrum.

Typically referred to as ?connected vehicles,? the U.S. Department of Transportation (DOT), along with major automakers and other public and private sector innovators, has been advancing vehicle-to-vehicle (V2V) and vehicle-to-infrastructure (V2I) communications technology to help prevent crashes that slow our transportation networks down. The U.S. DOT estimates that this connected vehicle network could potentially address 80 percent of all crash scenarios involving non-impaired drivers, saving thousands of lives each year while also providing significant mobility, environmental and economic benefits.

To help build and guide an emerging industry, the U.S. DOT recently sponsored and launched the Connected Vehicle Safety Pilot in Ann Arbor, Michigan in August 2012 where nearly 3,000 vehicles have been equipped to collect V2V and V2I performance data. This data will be used by the National Highway Traffic Safety Administration (NHTSA) to inform a potential regulatory decision in late 2013 for new light-duty vehicles, and in 2014 for new heavy-duty vehicles on how V2V and V2I communications technology will be rolled out in the United States. Even though connected vehicles are on the brink of transforming our nation?s transportation system, the 5.9 GHz spectrum has become increasingly desirable due to the diminishing availability of bandwidth in our growing world of entertainment and connectivity.

Policymakers in the U.S. have begun a parallel effort to assess and open up potentially underutilized spectrum for Wi-Fi applications in order to help alleviate an anticipated spectrum shortage. Last year the U.S. Congress passed the Middle Class Tax Relief and Job Creation Act, directing the National Telecommunications and Information Administration (NTIA) to examine the potential for spectrum sharing in the 5.4 GHz and 5.9 GHz bands. The law asked NTIA to evaluate ?known and proposed spectrum-sharing technologies? and the potential risks if unlicensed devices are permitted to operate in that band.

On January 25, 2013, the NTIA issued its initial report on the potential use of up to 195 megahertz of spectrum in the 5 GHz band by Unlicensed-National Information Infrastructure (U-NII) devices. The report expressed concern about the potential risks associated with introducing a substantial number of new, unlicensed devices into the 5.9 GHz band without proper safeguards, and agreed with concerns expressed by the Intelligent Transportation Society of America (ITS America) and its partners that further analysis is needed to determine whether and how the multiple risk factors could be mitigated.

While the NTIA laid out a two-year process for testing and evaluating the potential risks associated with spectrum sharing in the 5.9 GHz band, Federal Communications Commission (FCC) Chairman Julius Genachowski announced, prior to the release of NTIA?s conclusions, that the FCC intends to open up 195 MHz of spectrum in the 5 GHz band to unlicensed users. Raising additional concerns is that instead of waiting for the NTIA evaluation process to take place, the FCC has announced that it plans to issue a Notice of Proposed Rulemaking regarding the 5 GHz band at its February 20, 2013 open meeting.

Unfortunately, these actions threaten to undermine the entire connected vehicle and infrastructure program, potentially flushing years of research and development and hundreds of millions of taxpayer and private sector dollars down the drain. Earlier this month ITS America, along with AAA, major automakers, the American Association of State and Highway Transportation Officials (AASHTO), safety advocates and others banded together to send a letter to FCC Chairman Genachowski urging his agency to allow for due diligence by ensuring that any timelines contained in a proposed rulemaking relating to the 5.9 GHz band are consistent with the NTIA schedule for completing its quantitative evaluation and issuing final recommendations. It also requested that the FCC?s action not precede a decision by U.S. DOT regarding implementation of a connected vehicle network.

Connected vehicles have the potential to greatly reduce the 6 million crashes and more than 30,000 deaths which slow down U.S. roads annually and greatly influence the economy and efficiency of our overburdened transportation system. While there are feasible solutions to the bandwidth shortage that need to be explored, it should not come at the expense of life-saving technologies.

Connected vehicles and infrastructure will be a major topic of discussion at the Intelligent Transportation Society of America?s (ITS America) 23rd Annual Meeting & Exposition being held in Nashville, Tenn. from April 22 ? 24, 2013 at the Gaylord Opryland Resort and Convention Center.