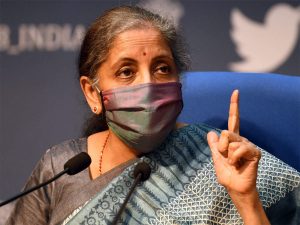 During a meeting with senior government officials to discuss the infrastructure roadmap, Finance Minister Nirmala Sitharaman has suggested that the various Ministries  try and spend more than their capital expenditure targets as well as explore public private partnerships for viable projects. He also called for ensuring clearance of Micro, Small and Medium Enterprises (MSME) dues at the earliest.

Union Budget for 2021-22 has provided a capital outlay of Rs 5.54 lakh crore, an increase of 34.5 per cent over the Budget Estimate of 2020-21. However, according to The Finance Minister, efforts from the budgetary side to increase the capital expenditure have to be complemented by the public sector enterprises, Sitharaman added.  The infrastructure expenditure is not just central government budgetary expenditure on infrastructure and includes infrastructure spending by state governments and private sector. It also includes government expenditure through extra-budgetary resources.

The MoRTH has been asked to explore the possibility of enhancing connectivity in hilly regions and to expedite the implementation of vehicle scrapping facilities.