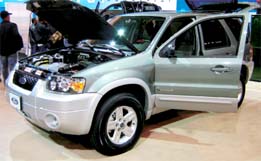 The rising cost of fossil fuel in the country has forced the government to look for alternative vehicle technologies. Even globally, there is a rising concern over CO2 emissions from vehicles. The solution is ‘Hybrid vehicles’. A hybrid vehicle is one that is moved by two distinct sources of power and is commonly referred to as hybrid electric vehicles (HEVs). An HEV is powered by the combination of an internal combustion engine and one or more electric motors.

Normally, a gas–powered vehicle is fitted with a fuel tank that supplies gasoline to the engine, thus triggering off the transmission that ultimately turns the wheels. As against this, in an electric car, a set of batteries provides electricity to the motor, thus activating the transmission that leads to the moving of the wheels. A hybrid, however, is a combination of both.

In a hybrid vehicle, the sources of power can be combined in different ways. In one of the techniques known as ‘parallel hybrid’, the engine and the electric motor can simultaneously turn the transmission on. As against this, in the ‘series hybrid technique’, the gasoline engine turns on a generator which then either charges the batteries or powers the electric motor that sets off the transmission.

A major advantage of hybrid vehicles is that they achieve greater fuel economy and lead to lower emissions than conventional internal combustion engine vehicles (ICEVs). Besides, they are less noisy and easier to service and maintain. Hybrid vehicles do not depend on the gasoline engine all the time because of the electric motor and batteries as an alternative source of power. At times, they can turn off the gasoline engine.

Realising the glaring need for fuel economy and lower emissions, the government has decided to promote the indigenous development of alternative vehicle technologies. The Ministry of Heavy Industries and Public Enterprises, in partnership with the private sector, academic institutions and other ministries, is working towards formalising a ‘Hybrid Mission’ soon. The mission will promote domestic research and development (R&D) of commercially viable electric and dual fuel vehicles by creating an enabling infrastructural support. The central government has also formed a joint committee with the Department of Science and Technology (DST) and intends to associate academic institutions like IITs in the working group. While the hybrids will be under the Sub-Group on Technology where DST is the partner, the larger council will include other ministries such as Road Transport and Highways, New and Renewable Energy and Power. 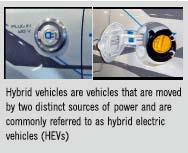 The high import duty has been the main hurdle in the introduction of such products in India so far. Hence, the government is considering a reduction in the import duty of hybrid vehicles so that the global automakers introduce their products in India. The attempts to make a dent in the conventional car market have failed so far because of the high cost of the vehicle. With a likely price premium of 60% over its equivalent model in India, a hybrid vehicle will remain the preferred choice mostly of the car owners and not the commercial vehicle owners. The Indian companies are still struggling to find component suppliers for hybrid vehicles. According to P Balendran, Vice President, General Motors India Pvt Ltd, “High acquisition cost, infrastructural constraints for dispensation of different types of fuel and awareness about the technology are some of the reasons for hybrid not finding its feet in the Indian market.”

Honda Motors was the first company to launch hybrid cars in India but met only with limited success and now, the car is available only on order. Toyota Motors launched its hybrid car, Prius in January this year. According to a company spokesperson, “We are not looking at big numbers in India and the question of making a dent in the Indian market doesn’t arise because Indian customers have not yet warmed up to the hybrid vehicle. Since it is completely imported as of now, the high acquisition cost could probably be the reason. Moreover, though it’s a hybrid car, we don’t get any subsidy from the government.”

Bharat Forge Ltd, the flagship company of the $2.4 billion Kalyani Group and KPIT Cummins Infosystems Ltd are entering into a joint venture to manufacture and market an indigenously developed hybrid technology solution for automobiles – REVOLO. This technology will enable the existing as well as the new vehicles to dramatically increase fuel efficiency and engine performance and will, at the same time, significantly decrease green house gas (GHG) emissions. With this technology, the service stations will be in a position to convert conventional vehicles into eco-friendly hybrids, thus giving the vehicle owners the option of upgrading their vehicles to a higher level of fuel efficiency without having to buy a new one.

Tata Motors is developing an electric ‘Indica’ and is also working on various other alternate fuel options including, what is famously known as, a car ‘which runs on air’ as well as a petrol-electric hybrid Indica. General Motors will launch Chevrolet Volt, a partially battery-powered vehicle in South Asia, including India, by the end of this year. SUV maker Mahindra & Mahindra has already designed a micro hybrid Scorpio with a diesel-electric engine for the Indian market. Besides, Maruti Suzuki will launch its fully-hybrid vehicle SX4 during the Commonwealth Games in October 2010.