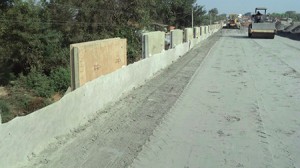 In the construction of roads and bridges, Reinforced Soil wall technology is strongly emerging as a preferred option due to its advantages over the conventional systems such as masonry walls & RCC retaining walls.

Indian road sector will be seeing a huge investment in the coming years. There is a target of construction of 30km ( or 41km as planned by the Road Transport and Highway Ministry) of road per day. However, to achieve this, speed of construction is very much important. Government’s target also includes commissioning 2,800km (2016-2017) of railway track and Broad Gauge lines at over 7 km per day. The plan is to increase the same to about 13km per day in 2017-18 and 19km per day in 201819. Bridges, flyovers and underpasses are required to be built as part of road & railway construction. These structures require solid approaches which are conventionally built using embankment or RCC retaining walls. 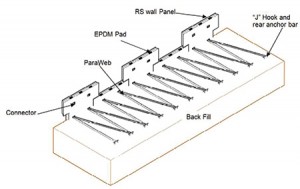 Earth embankments are usually constructed at a slope of 1H:2V as shown in Figure 1 requiring a ot of land. One of the reasons for delays in National Highway construction has been the process of land acquisition RS wall will require less land compared to conventional embankment which can reduce problems related to land acquisition. RS walls are found to be economical in general (considering polymeric reinforcement, thin concrete facia) and the simple efficient means of erection realize significant cost savings in range of 30 to 50% due to less execution time.

When it comes to speed, the method is particularly advantageous.

The average rate of construction for MacRes walls in typical conditions would be approximately 50m2 per location per day with one group. Therefore, completion of walls in the height range 5 to 10m will be achieved at the rate of 5 to 10m length of wall per day. This should represent an acceleration of construction time by a factor of at least 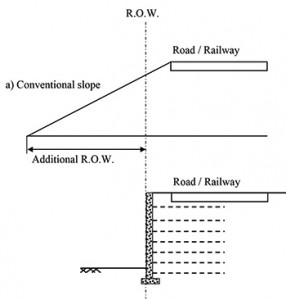 five times when compared with reinforced concrete construction. The rate of output may, where conditions permit, increase to 75 – 100m2 per day.

As with appearance, the distinctive pre-formed facing unit can be cast with a variety of attractive patterns, and in a number of colours. The walls’ flexibility and higher resistance to seismic loading are some other advantages. MacRes Walls have demonstrated very good performance even under high seismic loading. As per FHWA, differential movement of 1 in 100 is allowed for such structures.

Since para web is manufactured from polymeric materials, using it as reinforcing element eliminates the danger of corrosion. In general, carbon foot print emission for reinforced soil structure is relatively less and hence it is a green solution.

Italy headquartered Maccaferri is one of the world leaders in providing engineered solutions to problems related to bridge protection in hilly terrains, river bank erosion, landslides in hilly regions, floods in plains, improper drainage, siltation in water bodies, settlement and failure due to weak foundations, and steep slope instabilities. Incorporated in India in 1998, Maccaferri Environmental Solutions Pvt Ltd. has done more than 800 cost effective and eco-friendly structures in both public and private sector in India. 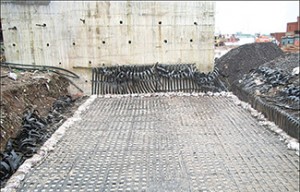 The impetus for the use of ParaWeb for reinforced soil wall applications came about in the UK in the early 1970’s when interest in finding alternative materials to the corrodible steel strips which formed the basis of the patented French method was significant and was led by the Government’s Transport Research Laboratory. The first ParaWeb wall structure was built by the Transport Research Laboratory at its Crow thorne facility in 1977. Samples are exhumed periodically for test to demonstrate the long-term performance characteristics of the material. Over the last 38 years, millions of square meter of Para Web reinforced soil wall has been built all over the globe in different environmental conditions. The first reinforced soil walls to be built in India using any system were the eight Para Web walls built for the National Highway No.1 at Ludhiana in 1989. The walls are still performing well. 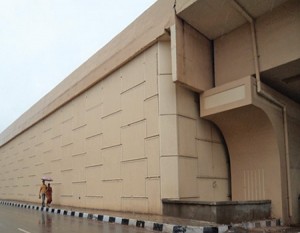 Drainage is also an important aspect for all retaining structures. Graded gravel is used as drainage media behind retaining walls. However, due to the scarcity of the aggregates in some parts of the country, MacDrain (drainage composite) is a good alternative solution.

ParaWeb soil reinforcement is BBA certified and has best long term design strength compared to all geosynthetic soil reinforcement. MacRes has positive strong connection between ParaWeb (soil reinforcement) and facia. Maccaferri has in house design, quality and skilled construction team. The quality team does periodic audits of structures.. The company has supplied material and contributed in construction of over 10 lakh sqm of MacRes walls in India.