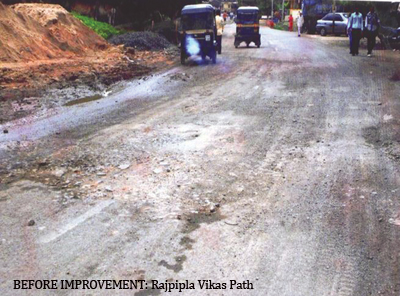 This is yet another visionary scheme to overcome the problems faced in the highway sections passing through urban limits due to traffic congestions and heavy rain waters in monsoon. Announced by the Government of Gujarat on the occasion of ?Urban Development Year 2005?,

this scheme covers improvement of state highways passing through cities/ towns. Under this, 132 nagarpalikas and taluka headquarters are included with 400 roads having a total length of 749.82km. Till now, work on 713.85km of 391 roads has been completed. Improvement on the remaining nine is under progress. 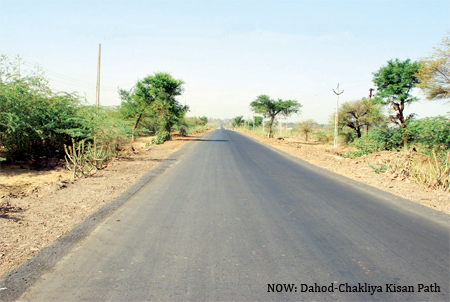 The GoG has targeted the improvement of road facilities in rural areas under its ?Kisan Path? scheme. The scheme is to strengthen these roads to provide further impetus to all round development of the villages and also to improve the connectivity between the talukas and district headquarters. This will facilitate smooth transport of farm produce to nearby Agricultural Produce Market Centres.

Under the scheme, 10308km of rural roads are being improved at an estimated cost of 1406cr, out of which work on 9139km of roads is already completed and the rest is under progress.

Widening/Strengthening of state highway road sections connecting tourist places across the state are included under the scheme called ?Pravasi Path?. 96 roads having a total length of 1122km have been identified for improvement under the scheme and work for 727km of 82 roads is completed. Rest of the work is under progress. The total budget allocation for the Pravasi Path scheme is 799cr.

Pradhan Mantri Gram Sadak Yojana (PMGSY) is being implemented in Gujarat too for providing all weather road connectivity to unconnected villages/hamlets with a population of over 500 people. The estimated cost for a length of 3226km providing benefits to 1620 number of villages is 425cr. Almost 1200 villages? connectivity work has been completed. 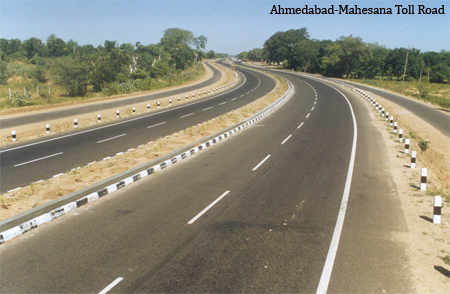 GoG and R&BD are in the forefront in this sector too. Privatisation has been identified as one of the means for raising resources considering the growing traffic demand, capacity augmentation and the daunting task of undertaking huge projects through only budgetary provisions.

R&BD is handling such projects through either Gujarat State Road Development Corporation (GSRDC) or Special Purpose Vehicles (SPV). Many projects have been implemented successfully under Public Private Partnership (PPP), many are being executed and yet others are in the pipline.

R&BD-GSRDC is also taking the benefit of Government of India?s (GoI) ?Viability Gap Funding (VGF)? scheme to promote private sector?s participation in the commercial implementation of infrastructure projects. Four road projects are getting implemented/ operational on the commercial format. While Rajkot-Jamnagar-Vadinar will be 126.40km long, Halol-Godhra-Shamlaji will be 166.20km long. Ahmedabad-Viramgam-Maliya will be the longest among these with a length of 179.90km while Bagodara-Tarapur-Vasad, which will be of six lanes, will be 131.65km long. In all, 3429.68 will be spent on these roads which will totally amount to 604.15km. 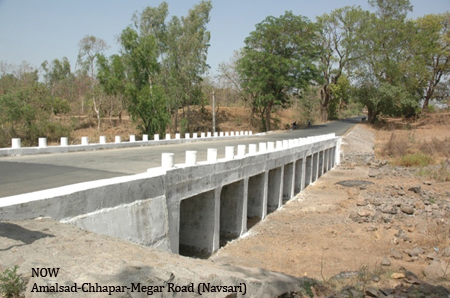 Annuity projects involve better road connectivity to ports and industrial areas. Eleven such roads with a length of 339.40km are under progress with a budget of 746.35cr allotted for them. In addition, the GoG has taken up 38 RoBs in lieu of level crossings and a ring road around Gir National Park.

District connectivity scheme is launched at a budget of 529cr to improve roads of 549km length connecting 14 districts of the state. Work is in progress on 18 sections. These roads will be widened to 10m. 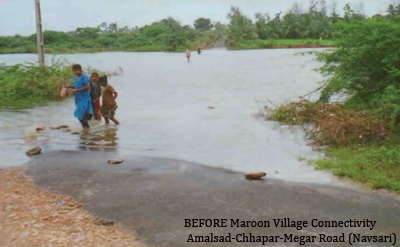 During heavy rains, many villages get isolated and disconnected due to flooding of access roads and\or submergence of the causeways. The R&BD undertook Maroon Village Connectivity scheme to provide all weather roads for such villages. The scheme includes the raising of road level and structures, providing adequate drainage and initiating soil erosion control measures at a cost of 276.71cr. Under the scheme, 164 villages are identified and work is already completed for 155 villages.

The visionary R&BD of GoG has excelled in its commitment to serving the community by providing better infrastructure. Innovations and quality consciousness are undoubtedly earning it appreciation while at the same time, they are also setting benchmarks for other states to follow.