By charting out various systems for the Regional Transport Office, Gujarat government has tried to bring transparency, efficiency and method to the entire process

?We need to use modern technology and make services available to the citizens with less hassles; and that is why the state government has decided to fully computerise the RTOs in every district,? remarked Chief Minister Narendra Modi during the inauguration of the new RTO (Regional Transport Office) building at Gandhinagar. Putting these words into action, the Gujarat RTOs have undergone a sea change. The Gujarat Motor Vehicle Department (GMVD), also the headquarter of RTOs, is responsible for the registration of motor vehicles and the issuance of driving licences along with road safety.

The state has witnessed a rapid growth in both the number of vehicles and drivers. While 4.32 lakh vehicles had been registered in 2001-02, 11.22 lakh vehicles have been registered in the state in the year 2010-11. The corresponding figures of driving licences issued are 7.79 lakh and 10.16 lakh respectively, which signal the phenomenal growth of mobility in the state. It is expected that this trend will accelerate and a larger number of vehicles and drivers will be included in the transport network, because of the state?s higher growth rate as compared to the nation?s. This growth has posed tremendous challenges before the department and hence, it has to constantly update itself to keep pace with the changes. This entails a significant intervention for safer roads along with better service standards.

Along with the Swarnim year celebrations in 2010-11, a mantra of growth and development was embarked upon by the RTOs called the ?SWARNIM RTO?. This concept was not only a roadmap for the following year but also a make?over for the forthcoming decade. This initiative was meant to ensure and increase efficiency and transparency and to methodically implement the processes of e-governance by acquiring new capabilities in technology, logistics and administration. 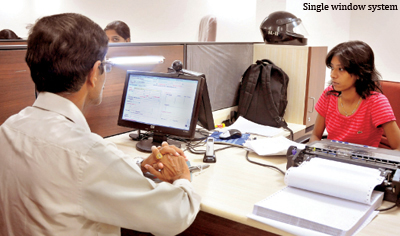 Prior to the introduction of the Single Window System concept, the applicant was required to move from one window to the other and wait for his turn, which ultimately resulted in long queues. The system was very time-consuming and tiring, causing inconvenience. Therefore, the Single Window System was conceived. All the processes related to an application like receiving applications, scrutinising, fee collection, bio-metrics, etc., are processed at a single window (counter). The applicant is required to wait at the counter while his application is being processed. There are a number of such counters. Thus, effectively, the queues are eliminated.

The flow of the processes is controlled through an online appointment or token system. Through this, people can arrive at designated time slots without having to wait. Through such unique and scientific initiatives, the state government has prepared a roadmap to modernise and upgrade facilities at all RTOs across the state. 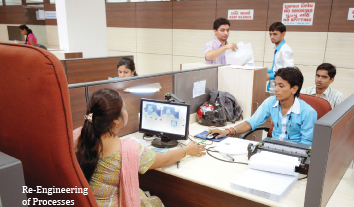 The previously existing process was complex, cumbersome and full of redundancies. It has been replaced by a simplified and standardised process to reap full benefits of the computerised system.

RTOs have a tie-up with the regional post offices to ensure safe and timely delivery of documents like RC Books, licences, etc., to designated addresses. This process has ensured that the customer need not visit RTO offices repeatedly for obtaining the required documents. This also ensures that the address of the applicant is verified while delivering the document. There is no extra cost charged to the customer for this service. 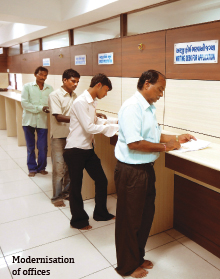 The old offices were designed for manual and low volume work. In recent times, there has been a surge in the number of applications for driving licences and vehicle registrations through speed post services. This has necessitated computerisation of the entire system, along with the renovation of the offices to suit infrastructural needs. Seven new offices are being constructed whereas the remaining offices are undergoing renovation with a designated budget of `80cr.

The RTO office keeps a record of all vehicle registrations, driving licence issuances and hence, it has to maintain a huge amount of data spanning over decades. The State Government has undertaken the task to digitise these records completely in a span of one year. This will help in building the master database and will facilitate easy retrieval of records, and the public will have access to the database, obviating their frequent visits.

The automated driving test tracks are being made by the department to ensure that a higher bar is set for checking the driving skills of a prospective licence holder. The track will be equipped with electronic sensors which will help in providing an on the spot grading of the driver?s skill, knowledge and the movements will also be recorded.

The Chief Minister Narendra Modi launched the Traffic Education and Awareness Mobile-van (TEAM) campaign from Gandhinagar. This scheme is targeted towards upper-primary and secondary school students in 11 districts of the state. It seeks to spread road safety awareness among school students. Specially designed mobile-vans equipped with multi-media and other communication gadgets were flagged off. The State government has also decided to include traffic rules and awareness related chapters in the school curriculum. The TEAM campaign was launched after the pilot project in Panchmahal district garnered positive response from the students.