High-Speed Rail: A sea of opportunities for Indian Industry

Nikhil Bugalia who is currently pursuing his PhD – Infrastructure Systems Laboratory of Department of Civil Engineering at the University of Tokyo (UTokyo), Japan, gives an overview of the key technological components for the upcoming HSR projects in India

The first High-Speed Rail (HSR) project in India, i.e., Mumbai- Ahmedabad HSR, is moving forward at a steady pace, and it is time for all of us to concentrate our energy into turning this project in a success story. The first system of HSR will undoubtedly be based on Japanese technology. However, for the HSR to deliver on its promises of the safe, punctual, and reliable mode of transportation is only possible when the Indian industry can steadily supply low-cost, high-quality technical products. For industry, the initial high capital expenditure necessary to set up the manufacturing, testing, quality management systems, and research centers can be rationalized for several HSR projects in the pipeline as well as towards the modernization plans for Indian Railways.

The focus here is only on Operation Technology, in which we will discuss the technology that is necessary for railway operations. Apart from the core technology of the railway system, the technology needed for improved passenger services is also part of this.

Rolling Stock, Track, Signaling, Power Supply, Station, and Control Center are all parts of the core technology of the railway system. Readers are directed somewhere else for a detailed overview of the entire core technology of Japanese HSR , and only vital components are discussed here.

As the maximum operating speed of the train increases, so does the braking distance. This implies that headway between the train should also increase, resulting in less capacity utilization. However, in Japan, passengers can find a train every four minutes on Tokyo- Osaka routes. Such high-capacity usage is possible because of the moving block system as opposed to a conventional fixed block system. In a fixed block system, the track is divided into segments and to achieve safety only one train can enter these segments.

The track is equipped with circuits, so when a train comes to a fixed block, it is detected through these circuits and signals for other trains are generated accordingly. However, this system still has a problem of train crew not able to follow signals leading to accidents. In a moving block system, the block is determined based on the current position of a train and the block moves as the preceding train moves. Hence, higher utilization of capacity is achieved.

The Japanese system of ATC combines the principles of moving the block and automatic braking (Figure 1) . For this system, the trackside ATC circuits, detect the accurate positions of the two trains. The onboard ATC system at the preceding train then calculates the Braking Curve for that specific train. The driver is accordingly shown speed limits inside the cab, and if the driver fails to apply brakes, the onboard ATC system automatically applies brakes. 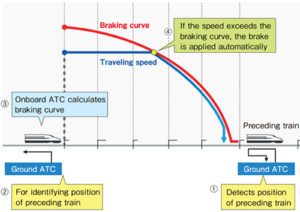 A detailed look into the ATC system will then immediately reveal several technical components that are crucial and will need to be developed domestically. First is a method of accurate position detection systems for trains. The Japanese system relies on precision Tachometer, which measures the rotation speed to calculate the position. This system results in some inaccuracy when there is a slipping of the wheel. The bogeys are equipped with slip detection sensors to counter wheel sliding. When these sensors detect the sliding, they can automatically adjust the brake force (for both electromagnetic braking and the pneumatic systems). For calculating the Braking Curves, the onboard ATC system then relies on several other sensors. It determines the braking performance of the specific train type using pre-loaded data. It also considers current conditions of the switches using the information from track sensors. Further, it also takes into considerations of the speed limits imposed by curves, etc. The system uses data of the track conditions which is pre-loaded into its onboard unit. Further, the system relies on several other sensors such as trackside sensors monitoring the weather conditions as well as a network of Earthquake early warning sensors. Collectively all of the above-described set of sensors are responsible for the smooth functioning of the ATC system and thus for the braking. All the above systems must work in an integrated manner avoiding interference from others. From a brief review presented here, it is clear that the HSR system relies heavily on numerous sensors to perform efficiently and it is this reliance which offers a plethora of opportunities for the Indian tech companies to innovate.