Indian cities are going through a massive change. Decision-makers are rethinking urban design to make public infrastructure more useable and accessible. For instance, public bike share systems in Bhopal and Mysore have changed the way people commute; or the redesigning of streets in Bangalore has created a safe pedestrian network. In other cities like Mumbai, Pune, Bhubaneshwar, and Gurgaon, the public right of way is being reimagined taking pedestrians’ safety standards into account, writes Rohit Tak, Senior Project Associate – Sustainable Cities, WRI India.

Reclaiming the Streets with Traffic Cones and Paint

Over the last year, WRI India has been working with local authorities and stakeholders in cities in order to improve the experience for pedestrians at busy intersections as well as to improve traffic flow. Using temporal urban design strategies, street geometry, and a whole lot of paint, busy intersections have been transformed overnight. 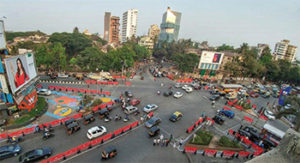 The first one was a busy intersection in Mumbai, where two arterial roads converge and intersect with other roads. The ‘HP Junction’, as it is colloquially referred to, underwent an overnight makeover. The roads were redesigned using very simple tools – traffic cones and paint – aimed at fixing the road for safe pedestrian movement. The logic was simple: by making roads safer for pedestrians, it is made safer for everyone.

The new intersection design introduced tighter corner radii, improved pedestrian space, and median refuge islands to shape the street geometry. WRI India was instrumental in implementing this change, in collaboration with the Municipal Corporation of Greater Mumbai (MCGM), Mumbai Traffic Police (MTP), and a coalition of ‘street-fighters’ under the Bloomberg Philanthropies Initiative for Global Road Safety (BIGRS). The trial was a major success. The intersection improvement led to a 30 percent reduction in pedestrian crossing distances, and included a refuge area at the median.

The success of this initiative led to more cities in India wanting to use this process to transform their roads. In Pune, the success of this temporary initiative let to the local corporation implementing the new design permanently at the Pune University intersection. In Bhubaneswar, the capital city of Odisha, Rupali Square, a major intersection has already been transformed. 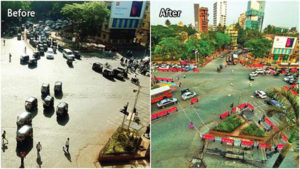 In Bhubaneswar, WRI India and Bhubaneswar Urban Knowledge Centre worked closely with local authorities – the Bhubaneshwar Development Authority (BDA), Bhubaneshwar Smart City Limited, Bhubaneshwar Municipal Corporation (BMC), and Bhubaneshwar Traffic Police – as well as planners and decision-makers. Through a hands-on workshop, the team helped participants ideate on elements of smart city design, with a special focus on what safe streets would look like from a child’s perspective. To that end, children were also invited to be part of the workshop.

Participants were encouraged to draw over existing maps of the intersection so as to make the Rupali Square safe for pedestrians to cross, cars to maneuver, and for people to enjoy. The resulting ideas helped the implementing team come up with a holistic design that catered to all concerns voiced at the workshop. Using these designs, the team with help from the local authorities transformed Rupali Square overnight.

The installation will be in place for a month, after which, the local authorities will decide the way forward. To measure impact, a random selection survey was conducted, before and after, asking road users a set of questions about their ideas of road safety and how safe they felt while crossing or walking at Rupali Square.