With energy resources becoming increasingly scarce, there have been a slew of initiatives to generate energy from a variety of alternative resources. Production of energy from biomass, biological material produced from living organisms and their by-products have been a significant contributor to this trend. Notable among these biomass energy initiatives has been the drive to produce energy from human waste. The technology not only reduces carbon emissions but also minimises the contamination of lakes, rivers and other water resources that occurs during the conventional disposal of sewage. For quite some time companies such as Thames Water and GENeco in the UK and PMC BioTec in the US have been producing biogas from human waste which, in turn, has been used to generate electricity. Now, an addition to this has been the effort to run vehicles on the biogas produced from human waste. 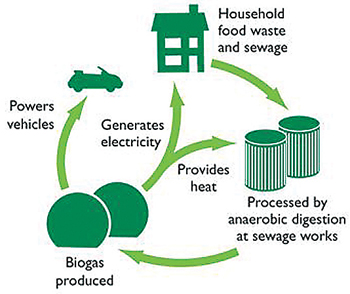 GENeco, a subsidiary of Wessex Water, a water supply and sewerage utility company in Somerset, UK has used methane gas extracted from human waste at its sewage treatment plant to power a modified Volkswagen Beetle car, christened the Bio-Bug. The methane is produced using the process of anaerobic digestion in which bugs break down bio-degradable material (in this case human waste) in the absence of oxygen to produce the gas. Carbon dioxide is then removed from the methane to improve its quality and to make it fit to power the car?s engine. According to the company?s calculations, waste produced from about 70 homes in Bristol is enough to power the vehicle for one year, assuming it does 10,000 miles a year. The Volkswagen Beetle which has been modified by the UK based firm, Greenfield Company, is designed to run on both petrol and bio-methane. The vehicle is started using unleaded petrol, and once the engine attains the right temperature, it switches automatically to methane. In case there is no methane, the engine reverts to petrol. The performance of the car is comparable to petrol or diesel powered vehicle. It gives a mileage of 5.3 miles per cubic metre of biogas and has a top speed of 114mph (about 183kmph).

The company?s plant at Avonmouth has been producing biogas for many years. It was used to generate electricity to power the plant with the surplus being exported to the UK National Grid. But to use biogas (methane) as a fuel for vehicles without affecting vehicle performance or reliability, the gas needs to be treated through a process called biogas upgrading. It involves carbon dioxide being separated from the biogas using special equipment which in this case was imported by GENeco.

Mohammed Saddiq, General Manager, GENeco told TrafficInfraTech: ?Previously the gas hasn?t been clean enough to fuel motor vehicles without affecting performance. However, through the use of the latest technology, our Bio-Bug drives like any conventional car and moreover, it uses sustainable fuel. At the moment we are using waste flushed down the toilets in homes in Bristol to power the Bio-Bug, but it won?t be long before the energy will also be generated through the treatment of food waste when we start recycling it at our sewage works?.

The students at University of Bath thought it would be appropriate that car be the classic VW Beetle Bug because bugs naturally breakdown waste at sewage works to start the treatment process which goes on to produce the energy.

Thus, eventually both human waste and food waste would be put to good use in a sustainable way, producing energy for powering vehicles and generating electricity and also diverting the waste that would have otherwise gone into landfills, generating undesirable emissions.

GENeco had organised a workshop at the University of Bath for students in Bath and North East Somerset to come up with ideas for the Bio-Bug. The choice of car was inspired by these ideas. Saddiq adds, ?The students thought it would be appropriate that car be the classic VW Beetle Bug because bugs naturally breakdown waste at sewage works to start the treatment process which goes on to produce the energy.?

This is a very exciting and forward-thinking project demonstrating the myriad benefits of anaerobic digestion (AD). Bio-methane cars could be just as important as electric cars, and Ofwat (the UK water regulator) should promote the generation of as much biogas as possible through sewage works in the fight against climate change.
? Lord Rupert Redesdale

The Anaerobic Digestion and Biogas Association (ADBA) said the launch of the Bio-Bug proved that bio-methane from sewage sludge could be used as an alternative fuel for vehicles. ADBA Chairman Lord Rupert Redesdale says, ?This is a very exciting and forward-thinking project demonstrating the myriad benefits of anaerobic digestion (AD). Bio-methane cars could be just as important as electric cars, and Ofwat (the UK water regulator) should promote the generation of as much biogas as possible through sewage works in the fight against climate change.?

GENeco?s Bristol plant produces around 18 million cubic metres of methane every year. If all this was used to power vehicles, it would prevent about 19,000 tonnes of CO2 being emitted into the atmosphere.

There are unquestionably many advantages of producing biogas from human and food waste. It avoids the process of treating the human waste and releasing into a water body such as a river or an ocean, and the associated costs and related water pollution, though it may be reduced by effluent treatment of the waste. Further, the process of extracting methane from human and food waste and using it to produce electricity ensures that the waste does not degrade in an open uncontrolled environment, thereby reducing potentially harmful methane emissions. Also, energy generated through biogas displaces fossil fuels that would otherwise have been used and which are a principal contributor to global greenhouse gas emissions.

Previous: Interview with: Kevin Kelly, ITS In Parking, India is going in the wrong direction
Next: Interview with: David Moszkowicz, Planning and Scheduling are important for optimising Services