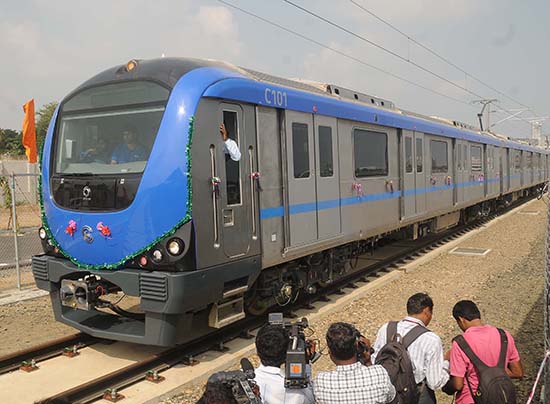 L&T Metro Rail, the concessionaire for the 72km elevated Hyderabad Metro Rail project recently began the first test run for the project. The test run is being conducted on a train with three coaches. Several tests will be conducted on the rolling stock, both in static and running conditions in the depot and viaduct. After completion of these tests, there will be an inspection of the rolling stock and facilities, and safety /approval certificates will be issued by respective vendors.

After this, trial run of the Hyderabad Metro Rail (HMR) will begin. During the trial run, all seven trains being used for the Metro will run all day long for 60 days during which test parameters such as reliability, availability, maintainability and safety will be monitored and evaluated. The Commissioner for Railway Safety would then conduct a safety audit of the project during which an inspection of the tracks, safety and speed norms will be carried out. RDSO officials will check for compliance the trains with design parameters, standards and specifications. The trial run has to be carried out for 2000km for the certification process to be completed.