In this Decade for Action on Road Safety, the best beginning to safer roads is by religiously taking up Road Safety Audits during the planning and designing stage itself. Dr Nishi Mittal, Head of Traffic Engineering & Safety at Central Road Research Institute, writes on the impediments faced in India on performing RSAs.

Road accidents are a major cause of worry all over the world. They claim a child every three minutes and 3000 lives every day globally. They are the cause of over 50 million injuries annually and cost the developing countries over US$ 65 billion. These deaths are more than many passenger plane crashes put together and the cost is much more than the official aid received by the developing countries all over the world. In India, more than 100,000 lives are lost in road accidents every year while 400,000 people suffer from injuries. Sweden has set itself a target of Vision Zero by 2020, it might be difficult to envisage something similar in India in the near future on such a grand scale. But Road Safety Audits (RSAs) can prove to be extremely useful in tackling this problem. The developed countries are committed to road safety audits with an aim to reduce loss of life and serious injuries on the roads.

While the developing countries account for approximately 85% of the deaths worldwide, India alone accounts for 10% of these deaths. It loses around 3% of its GDP to road traffic accidents. It is also a serious concern that majority of the accident victims are in the age group of 15-39 years (around 50-65%) followed by 40-59 years (around 20 to 30%). This makes a Road Safety Audit all the more significant. 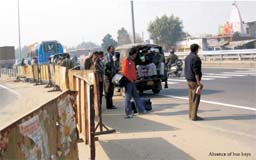 A Road Safety Audit (RSA) is a proven methodology for ensuring that various safety deficiencies and designs are reviewed at appropriate stage in a cost-effective way. It can ensure the review of various safety deficiencies in the roads which can be done away with during the process of designing roads or carrying out operations on them. RSA is an objective approach to the assessment of the potential of an accident. It is to be carried out by persons who are independent of the original design team so that objectivity is maintained in the audit. What is important is that a RSA should become an integral part of highway planning, design, construction and maintenance.

Massive development and improvement of road network; upgradation of highway network to four or six lane roads etc. provided golden chance for highway engineers and planners to plan and build road safety features. But this doesn’t seem to have happened.

The upgradation and widening of highways has some very positive effects like it increased the mobility for high speed traffic but it has been found that it made life more miserable for vulnerable road users (VRUs). This was because no adequate pedestrian footways were provided or proposed, and the required underpasses or pedestrian crossings were not provided too. Plus, there is an absence of bus bays and there is no provision for facilities for cyclists. Also URVs were not accustomed to cope with such a road environment.

Road Safety Audits have been undertaken in India mainly for some projects that needed external funding and for which lending agencies insisted. But they were invariably delayed and conducted at a much later time than was needed. The implementation of RSAs is a difficult task in India for various reasons. 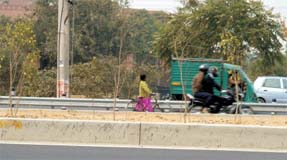 On a national level, the first RSA guidelines were produced in 2003 by Central Road Research Institute (CRRI) under Ministry of Shipping, Road Transport & Highways (MOSRTH) sponsored research study. These were again revised by CRRI in 2009. This is being adopted by Indian Roads Congress (IRC) in 2010 as Manual for Road Safety Audit IRC-SP-88, 2010. The RSA manual prepared by CRRI in 2010 contains these main topics: Introduction; an explanation of road safety audit; stages of road safety audits; road safety audit process; salient features and principles for safer road designs; specific parameters to be considered in the present day traffic scenario in India; covering safety issues for non-motorised traffic and safety issues of High Speed Corridors, Safety Audit Process for Rural Roads; checklists; and elements of a good RSA and measure of its success. A guideline is also given on the procedure to start RSA in an organisation.

It is a welcome step that Road Safety Unit is set-up at NHAI. However, it needs to be strengthened. Right now it is weak and often faces frequent changes in the set-up. An adequately qualified or experienced staff on the subject of road safety is also lacking. And to complicate matters, a similar situation exists for almost all the states of India.

What raises question on the intention of authorities is that for BOT projects, the mandatory Safety Audit on the designs proposed by the concessionaire has been dispensed with. The situation becomes shoddy as due to political pressures, the authorities are in a hurry to start the project. This reflects a casual attitude among professionals.

There is a widespread apathy towards building road safety knowledge and its widespread dissemination but efforts have been made by international lending agencies to build up a road safety knowledge base by producing road safety manuals. A manual for ‘Safety in road Design : A Guide for Highway Engineers in India’ was produced by the Ministry in 1998 with publication of 1000 copies but nothing happened till 2005, when again at the instance of the World Bank, a project for the dissemination of the manual was implemented. What is frustrating is that there is a total lack of commitment on the part of decision makers towards road safety. RSA as a safety tool is not utilised in a systematic way and there is no formal commitment to use safety audits.

Factors responsible for RSAs not taking roots in India

i) Lack of Commitment: It is found that highway agencies lack the commitment needed to implement RSAs. There is a limited understanding and agreement among the transportation agencies on the importance of RSA. Moreover, RSA is not institutionalised within the highway organisation at national or state levels, and was undertaken only for World Bank or ADB funding projects till recently.

What is needed for organisational commitment at various levels is the creation of a cell to promote road safety and nomination of persons as nodal officers for RSA. It is also important to tackle important RSA issues and develop policies & practices relevant to the organisation. Both will be inter-dependent and help each other. While the Road Safety cell will act as a nodal point for road safety and RSAs, it will also help in the implementation of the organisation’s policies in tackling RSA issues. The nominated persons will have to undergo practical training for conducting RSAs. For this, they will need to gain experience with national and international safety auditors and carry out some pilot projects including training and workshop sessions with them. Managers, designers and potential auditors will have to be included in this programme.

The policies, on the other hand, will have to be framed around ways to create awareness and bring about cooperation among senior executives, managers and designers; incorporating RSA into design or design/construction contracts; the percentage of projects to be audited; the authority that can conduct RSA; and the procedures to deal with recommendations of RSA and including its feedback into the designs. The important strategies will be to frame accident remedial programmes along with identifying black spots, and routine RSA of road and traffic designs.

ii) Long Delays: What adversely affect the RSAs are the long delays due to administrative reasons. Moreover, RSA reports keep lying and are hardly made use of. It is an irony that the RSAs that were actually planned for the western corridors or the Golden Quadrilateral at the design stage itself could take place only after they were actually built. Most often than not in the cases where audits have been undertaken, the full cycle of the RSA process was not followed. Not just that, even completion meetings were not held, nor were the response reports prepared.

iv) Lack of Cooperation among stakeholders: For something as serious and crucial as RSAs, cooperation among the client, the designers and the auditors is required to perform the audits and use the results. However, there is hardly any cooperation. The design consultants are not available for any changes in the project design, if required due to the big time lag between the design process and the audit process.

v) Lack of Awarness about distinction between RSA and design checks: Lack of awareness about the distinction between RSAs and the design checks too is an area that needs serious looking into. The auditors do not understand that RSA goes beyond the strict application of standards. This is mainly due to the lack of their exposure to safety engineering in their professional education, training and experience.

vi) Lack of Road Safety audit policy in India: Another glaring problem is that there is no Road Safety Policy in India at all. Although the RSA is much talked about in seminars and at workshops in India, a Road Safety Audit Policy is missing at national and state levels. It is needed to clarify what projects are to be audited and at what stage of the project. Also, there is no slot for safety checks at planning/design stages nor is there any financial provision for undertaking RSAs.

There is a need to create awareness among highway professionals for making roads safer through the use of RSA. It is important to print the RSA manual / guidelines in large numbers. Training workshops should be organised for providing knowledge on safety knowledge and providing information on available literature. Highway authorities like MOSRTH, NHAI and IRC will need to commit themselves much more seriously on road safety aspects. Only then will the state and local authorities begin to follow them.

It is a welcome sign that as per the recently approved Road Safety Manual brought out by the Indian Road Congress (IRC), updated road safety audits will be carried out on all big road projects including national highways henceforth. The recommendations are that experts will carry the safety audit not just during the design and implementation phases of the projects but also in the post operation period to identify deficiencies and rectify them. NHAI has also awarded about 6000km of national highways to be audited at development and construction stages.

Previous: Pedestrian and Bicycle Plans and Safety Measures in North America
Next: Interview with: Purushottam Sharma, “We need to empower traffic police with technology”