Improving the Efficiency of Bus Transport in India

As safe and improved public transport debate gains momentum, there is a growing need to improve the efficiency of bus transport in India. U Sudhakar Rao, Executive Director, Association of State Road Transport Undertakings addresses the issue.

With more than 1.2 billion people, the Republic of India is the world?s largest democracy with a population nearly four times that of the United States. Also add to the fact that India is a vast country extending over an area of 3.29 million sqkms.

Given its vast area and huge population and a wide network of roads, there is an immense need for increasing the supply of public transport infrastructure in India. There is also a need to strengthen the existing public transport modes and services. By doing so, access to employment, health care, recreational activities and commercial activities will be provided. A good public transport system will also promote mobility & reduce social isolation of the people living in the remotest villages, propel the engine of national economy, overcome pollution, congestion & road accidents, and integrate our vast country by reaching to the people of the remotest villages. 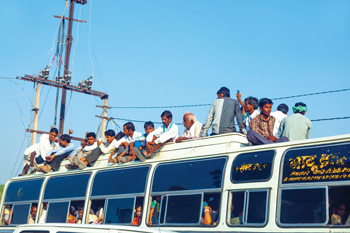 The conventional Bus is relatively a more convenient, speedier and cheaper means of passenger transport in providing economical, adequate and well coordinated rural transport network. While this bonanza service,

so named after its vital role cited above, is provided by both the State Transport Undertakings and the private operators, the objectives of these two operators are convergent on certain aspects and divergent on certain others. Accordingly, private operators in India, as everywhere, choose to operate bus services on profitable routes, leaving out the unprofitable ones. The STUs, on the other hand, are operating bus services to various villages subject to the availability of motorable roads, either on their own initiative or on being directed to do so by the State Governments concerned. Here it may be mentioned that the STUs are caught between two divergent corporate objectives — of plying the services on commercial considerations on the one hand and social considerations on the other. There is, however, a need for reasonably reconciling these two objectives, lest the STUs should cease to operate on uneconomical routes thereby depriving the rural masses access to various goods, services and facilities. The reconciliation becomes possible only if the Central and State Governments realise that the STUs, by taking up bus services in villages, are only discharging a social obligation which, strictly speaking, is one of the constitutional responsibilities.

A few points are significant in the case of State Road Transport Undertakings (SRTUs). The objective of the RTC Act of 1950 is to promote an efficient, adequate, economic and properly coordinated system of public road transport service in the country, to protect the workmen and their family by providing financial and social security, and to create infrastructure for bus depots, bus stands, workshops, training institutes etc.

How to improve the efficiency of bus transport in India?

The question is: Why do we need a good public transport system? Bus based public transport plays a key role in cities, suburban, inter-city and rural passenger transport and reaches nearly every nook and corner of India. SRTUs in the country, with about 1.47 lakh buses, are providing organised, safe, affordable and reliable services but they are experiencing financial crisis due to endogenous and exogenous factors. Each state has its own taxation policy like Motor Vehicle Tax, Passenger tax, VAT, Sales Tax, Octroi, etc. which creates a trouble in having a uniform system all over the country. The Government can support public transport in a number of ways.

Policy strategies: Planning for public transport in India is important. Setting up of bench marks for bus operation and of public transport regulatory authority can be done under this. Re-establishing the service status for buses and bringing policies of States in a more equitable manner towards SRTU through mandatory compliances too should be taken up. Regulating private sector in bus operation is another policy matter that must be seriously looked into.

Concessions in taxes and levies: There can also be support through concessions in taxes and levies that will go a long way in strengthening the public transport system. Reduction of Excise duty on passenger transport vehicles, exemption of payment of income tax by the SRTUs, exemption of payment of Service tax for casual contract services operated by SRTUs, reduction of taxes of MV tax and passenger tax, and reduction/exemption of toll tax are areas that need immediate attention.

Subsidies and grants: Full reimbursement by the State Governments for concessional travel to identified categories of commuters is one area that demands attention. Providing grant/subsidy/Viability Gap Funding (VGF) in support of losses incurred in rural operation, promoting PPP projects for operation of buses in rural and hilly area under Gross cost/Net cost model, one time funding to purchase buses by the Central Government/State Governments for rural connectivity, providing land infrastructure grants and promoting PPP projects for development of public transport infrastructure, and third party insurance facility for SRTUs too will be a strong support.

Other important strategies: In addition, automatic fare revision; liberty to SRTUs for mobility funding by way of loans; inter modal integration of different modes of transportation systems, buses, railway stations, metros, etc.; central assistance for implementation of ITS in SRTUs; improving the quality of buses; and adequacy of public transport buses too will have to form a major part of the strategies.

Bus based public transport is the backbone of the country. The need is to move people across India in a very economical and efficient manner to reach every nook and corner of the country. The urgent need to strengthen the SRTUs/bus passenger transport in the country is to overcome pollution, congestion and road accidents which are the grave concern to the society at large.

(Sudhakar Rao has worked with Andhra Pradesh State Road Transport Corporation in various capacities. He has been associated with many projects including CNG vehicles and World Bank Energy Saving Management Programme on fuel conservation (2010). Widely travelled across India and world, he is at present Executive Director of ASRTU at New Delhi.)