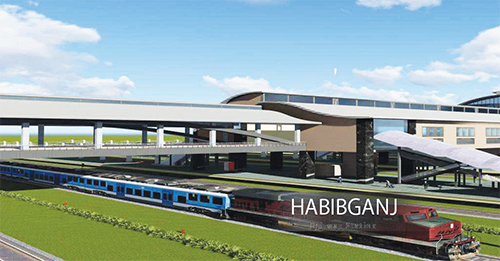 Habibganj in Madhya Pradesh will redefine the concept of a railway station in India, becoming India’s first railway station to be redeveloped as a public-private partnership project. It is set to become a swanky commercial hub with shops, offices and hotels.

Have you ever seen a railway station in India that has a hotel at its premises, ultramodern commercial shops, video game zones or virtual museums, to keep the passengers entertained and relaxed during their journey? If not, that’s quite a possibility now. Under the Modi government’s massive railways redevelopment plan, stations are being developed with ‘airport-like’ facilities. Not only will those be constructed in a record time – and will be operational in the next eightnine months – the facilities will also be self-sufficient to undertake maintenance by generating own revenues.

Indian Railway Stations Development Corporation Limited (IRSDC) has roped in various Central public sector units to do the initial studies for station development. Habibganj railway station is redeveloped by IRSDC along with private firm, the Bansal Group under PPP model.

Habibganj station has been designed as a multi-modal transit hub, after examining key international case studies on station development and property development to put international benchmarks and best practices at optimum costs.

Self-development model is another model which is being followed for 10 stations. In this, NBCC (India) Limited will modernise and commercially develop the stations. The end-users could be buyers of homes, shops or commercial establishments. NBCC has already started work at Gomtinagar, a station near Lucknow.

Another model, followed for five stations is called the operations and management model, where IRSDC initially awards the rights to operate and manage the railway station to experienced companies. It is expected to be ‘low cost and high visibility’ model.

A consortium of Bansal Construction Works and Prakash Asphalting & Toll Highways has formed a special purpose company- Bansal Pathways Habibagnj Private Ltd to implement the project. The Bansal Construction Works will maintain and operate the station for eight years. The work has already begun at Habibganj, and it is being reconstructed on the lines of Germany’s Heidelberg railway station.

The station is being redeveloped at a cost of Rs 100Cr, while Rs 350Cr is being spent on its commercial development, leading to an overall cost of Rs 450Cr. The station is expected to earn around Rs 6.5-7Cr initially, which could increase to Rs 10Cr per annum.