The station will have central air space concourse of 84m long and 36m wide equipped with amenities for waiting and seating. This shall ensure minimal congestion and loading on platforms to avoid any mishaps or overcrowding. To avoid any chance of mishaps or stampede scenario, there will be complete segregation between arriving and departing passengers. A smooth flow of passengers shall be ensured through the planned station user movement.

The station is planned as differently abled friendly. International practices and Indian norms have been taken into consideration to ensure adherence to prescribed standards. Provision of six lifts, 11 escalators and three travelators have been made for easy access to platforms and concourse. To ensure a seamless flow of passengers in all-weather conditions and better passenger movement, two underpasses of 4m width have been provided for arriving passengers.

The station will have dedicated approach roads for traffic to railway station along-with municipal roads with its integration in circulating areas. This shall ensure easy ingress/ exit along with convenient parking provisions without creating a traffic block and congestion on the city roads.

There will be a dedicated pickup, drop off and parking facilities for the station users. Provision of parking for approximately 300 cars, 850 two-wheelers, Rickshaws, Taxi & buses have been made.

The station and passenger amenities shall be operated and maintained by a private sector concessionaire under the supervision of IRSDC. 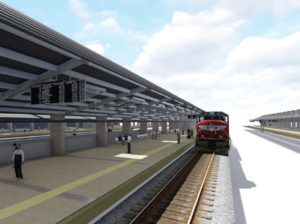 Phased development approach was undertaken to ensure revamping and capacity addition in a modular development way at a later stage when passenger /station users increase. Station will comply with NFPA (National Fire Protection Act) to mitigate any fire mishap.Extensive reuse of water is planned with Zero discharge technology for sewage systems being put into place. Approximately 6800sqm is identified for soft landscaping and 7300sqm for hard landscaping. To ensure cleaner energy from renewable and noncon conventional energy, provisions for solar energy generation are provided in the station. Adequate provision of rainwater harvesting has also been made at identified locations.

The Habibganj station will have a glass dome-like structure which will serve as the entrance. The railway station will become a ‘green building’ with LED lighting and the wastewater will be treated as well for reuse. IRSDC is also working on other ideas like installing video game zones and virtual museums to make the station more passenger friendly and commercially viable.

According to IRSDC, about 80% of civil work for the ambitious project has been completed. The station will be completely redeveloped and ready by December-end 2019.

The work on the new concourse took more time than expected due to the requirement of several clearances being first of its own kind. By December-end, IRSDC will be able to complete work on this world-class station.

Just like airports, the new station will have cafeterias and food plaza. Along with a food court, the station will also have a plush waiting lounge. Aside from ‘holding areas’ for passengers at every platform, there will be provision for an exit underpass for passengers de-boarding trains in order to decongest the platforms. In short, it will be like a city centre Rail Mall.

• Glass dome-like structure at the entrance
• Dedicated concourse area with airport-like retail outlets and food cafeterias
• Plush waiting lounge for passengers; clean toilets
• Refurbished, world-class interiors; gaming and museum zones
• Decongested platforms with exit underpass for passengers de-boarding trains
• “Green building” with LED lighting and wastewater treatment for reuse
• Eastern side to have hotels, hospitals, spas and a convention centre outside the station
• Western side to have offices, retail, malls outside the station.
• The entire area on development would be a ‘Railopolis’.